Today was our last full day riding in Nicaragua and boy did the country put on a show.  The show started in a very sad way, with what looked like a fatal motorcycle accident on the edge of town.  We arrived on the scene after a large crowd had gathered and police were clearly interviewing witnesses.  The motorcycle was still in the middle of the rode and a blanket was draped over what looked a body – the latter being mostly avoided by the crowd.  Perhaps I misread the blanket – I can only hope so.  Needless to say, we were even more cautious from that point forward.

I hate to even mention these sorts of things but it is what happened today and in this blog we are trying to record what we see and do.  The roads here are actually pretty safe as there are so many things (like us) going slowly.  Everyone is much more aware and takes care to give us room.  You’d have to say that the motorcycle riders are sometimes their own worst enemy – motorcycles, along with the chicken bus drivers, are the ones we note pushing things more often.

We had a 15k climb to start the day.  It was great being out on the climb in the cool morning air.  We also had a bit of cloud cover and a tailwind.  Happy days if not for having a bit of sadness from the motorcycle scene.

We crested the climb, rode down the other side and then joined up with Highway 2 – the main north-south road in Nicaragua.  We stopped shortly after the junction in Nandaime for a cool drink.  We expected a wider shoulder and more traffic on Highway 2.  We got neither.  The road surface was smooth but there wasn’t much shoulder.  Traffic was kind of choppy, coming in waves towards us – we learned why a bit later. 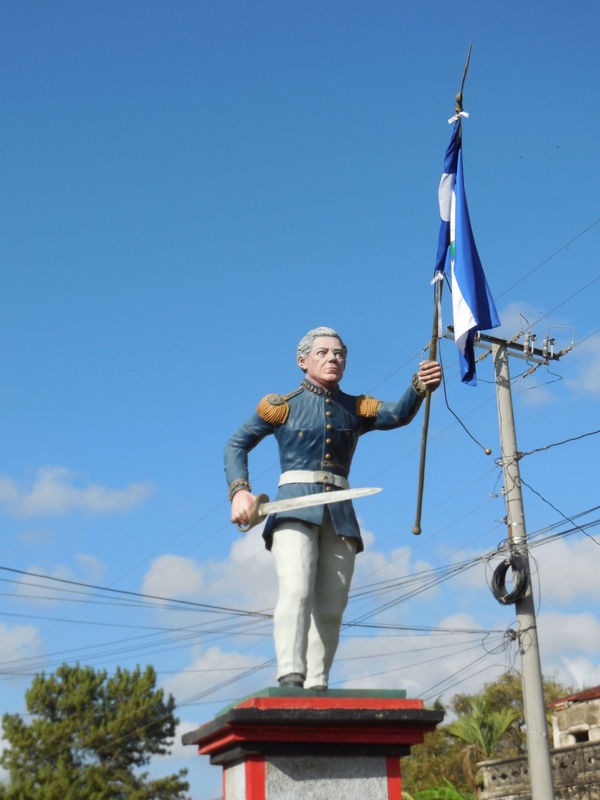 Monument in Nandaime – Estrada – hero from the late 1790s

On truck at morning tea 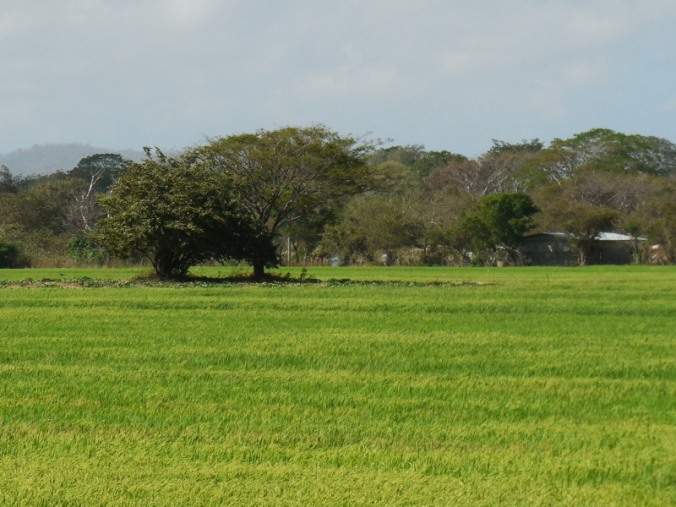 The first encounter was road works.  We couldn’t really tell what they were working on, but the road was one way around the works – guys with hand brooms sweeping something.  This first delay explained the bunchy oncoming traffic but also served to make the cars behind us bunchy.

If the road works were puzzling, the second delay was even more so.  We first passed a large group of small covered wagons parked on both sides of the road.  They kind of reminded us of the gypsy groups from Eastern Europe – lots of children, farm animals and families.  We first thought they might be homeless but once we got a bit closer we realised it was a group that was likely on a pilgrimage.  They all had matching yellow or purple flags and had decorated their wagons with signs and ribbons.  Given that Easter is approaching and is the most widely celebrated and important religious holiday of the year we think that this was one of many pilgrimages that people undertake as part of the Easter celebration.

Later we caught up with another group of the covered wagons – they were blocking the full lane and had police escorts helping them stay safe.  We at first thought that we should hang out behind them but clearly we were moving faster so we pulled up into the oncoming lane and overtook them.  Oncoming traffic was blocked so this was completely safe.  By the time we reached the front, they were starting to pull off the road and no traffic was passing them in either direction.  We got through and had our own private bike lane until the car bunch caught up with us again. 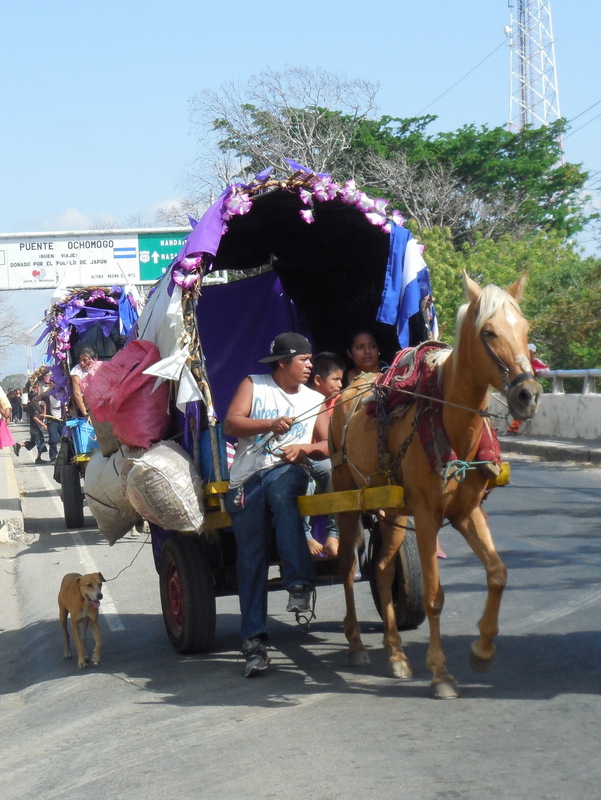 Wagon on the road

Our next exciting moment came when we crossed a small creek and heard monkeys howling.  We pulled up and walked around their trees for a while.  This was our first encounter with monkeys on this trip.  We think that they were howler monkeys because that’s basically what they did most of the time we were there.  We are planning on staying at an eco reserve tomorrow night that is supposed to have more of these monkeys as well as other animals – can’t wait. 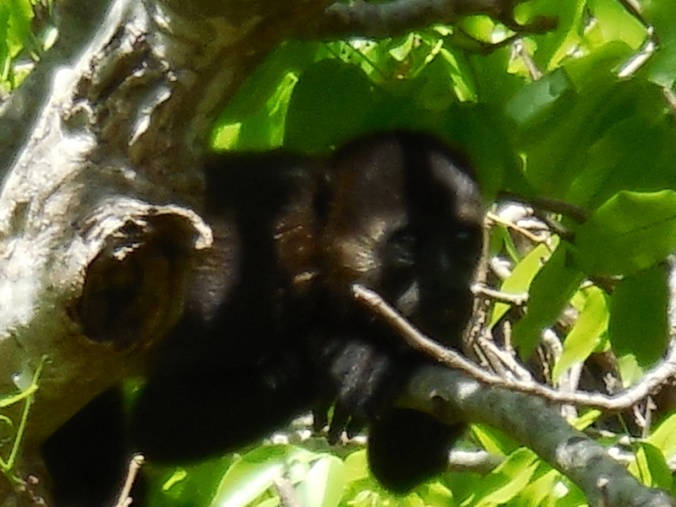 The last 15k to Rivas was a bit of a challenge as we now had a strong side wind.  It was all fine when there was no traffic but buses and trucks passing in either direction made for gusts and sore arms as we hung on tight to the handlebars.  We arrived in town with nerves a bit rattled, well before noon.  So we did the obvious thing, stop and have a coffee at Casa de Coffee – sort of a Starbucks/Gloria Jeans combo.

Casa de Coffee had a nice map on the wall showing the Nicaragua coffee growing regions.  As we suspected, we barely entered any of them as they are more inland, in the mountains.  We did pass through a small region today at the top of the climb.  Even Casa de Coffee only sells coffee drinks.  They don’t sell beans.  As we saw in Leon and Granada, the purist coffee culture has not yet developed.  Still it was nice to see the map of where beans are crown.

Just picked – fruit stand on the edge of town

We skirted the left side of the lakes.  Most of the coffee is up north central.

The next job was to find our hotel, the Hostal El Galan.  This proved much harder than it probably should have.  First location that Google maps pointed us to was completely wrong, which we discovered by asking some bicycle taxi guys.  At this point Google location finder on the phone was also putting us in the middle of a block – and I mean middle, as in the centre where there is no road.   We asked a few more folks and ended up at a different hostel.  They had rooms but couldn’t find their “book” and didn’t know which rooms were free – odd.  At least they helped us find our intended hostel.  While Nancy was inside, I met Francisco, from Italy on the street.  His cousin lives in Australia – he didn’t really speak English or Spanish – I needed help from Ross on that conversation.

We rode on.  Several more wrong turns and Google misdirects – but we finally made it.  The hostel is ok, basically a family home with lots of kids and guests running around.  We negotiated a room with A/C and settled in.  After washing and showers I went out to hang clothes on our bikes.  The owner motioned that I should go in the back and use the clothesline.  While out there, I spotted a box with 7 puppies.  The mom was lingering in the area but she let me get a photo and even tolerated Nancy and me sitting near her for a spell.  The pups are really cute – though both of us agreed that Nicaragua does not need 7 more dogs to feed and look after. 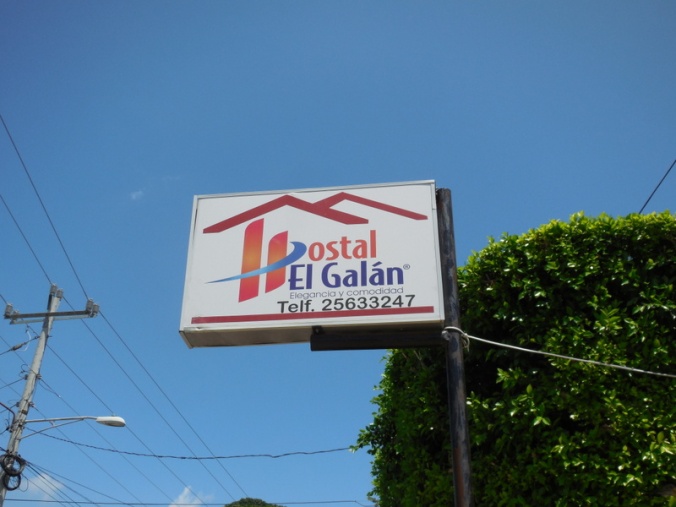 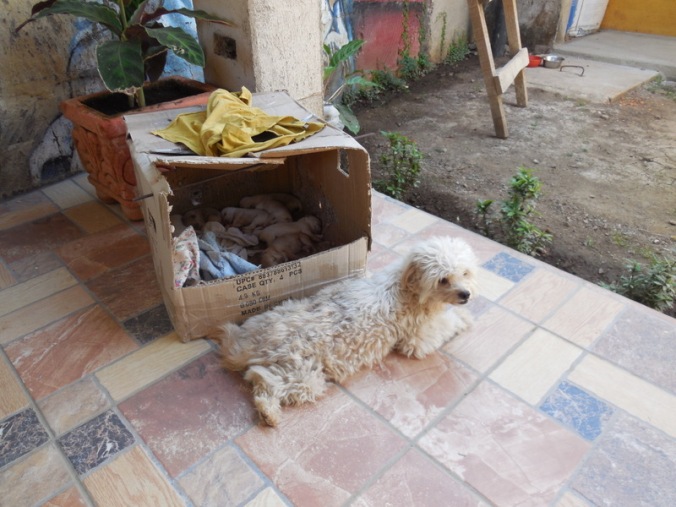 Mom is now back on the job!

We walked to the shops and came back to have another rest before dinner.  On the walk I spotted a monument liked we’d seen several times while in Nicaragua.  It turns out that they are monuments put up by Sandinistas for fallen comrades.  I wrote about the revolution here a few days ago – I didn’t mention that 50,000 people were thought to have died during that war.  These monuments are sad reminders that it was a real struggle and that people here suffered significant loses. 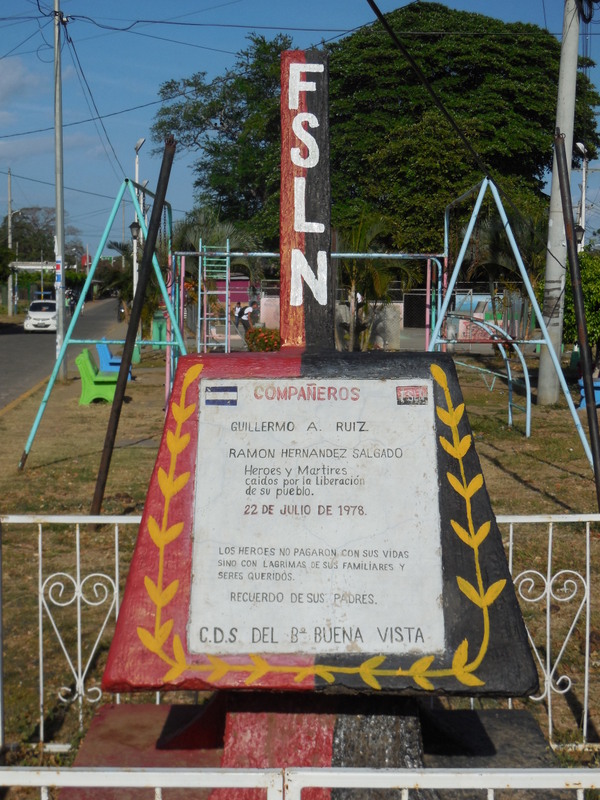 Wow – what a day.  Lots of things to see and emotions to experience.  Bike trip days are never boring and almost always surprising. 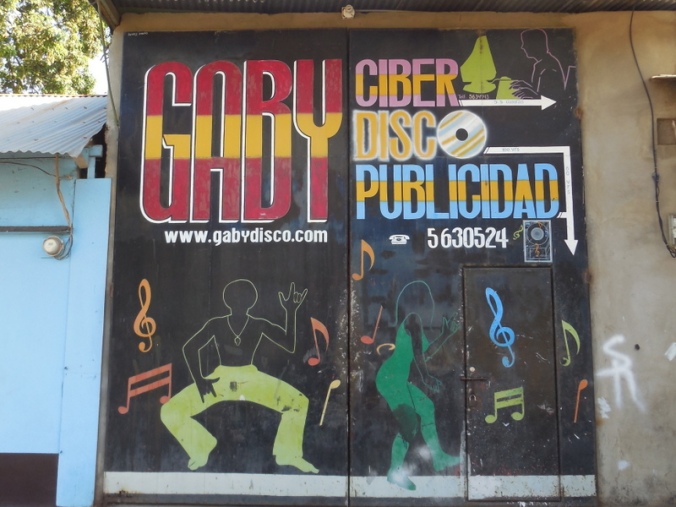 Next to our hotel – and on the wall we are sleeping near – I hope they don’t get started tonight!

Tomorrow we cross into Costa Rica and plan on staying at the lodge I mentioned above.  We may not get Wi-Fi there so details may be a day late…  We’ll post when we can.