Today we had planned a short kilometre day to get us to Granada but we knew the first part of it was through the traffic of the Managua suburbs so we rolled out of our hotel not too much later than usual.  Well, it probably wasn’t quite early enough, as the first 15k or so felt like a bit a battle.  I am not sure we’ve seen that level of traffic since we rode out of Istanbul Turkey on our previous long bike trip.

We were initially on a major thoroughfare that headed into the city so there was lots of commuter traffic.  People were pretty good about giving us room, but there wasn’t a lot of extra room on the roads (no real shoulder) and there were lots of stop lights to add to the traffic backups.  Actually, the traffic lights didn’t really matter, as each intersection was manned by traffic police who were controlling the traffic flow with lots of whistles and hand waving.  Drivers in Nicaragua love their horns so in addition to the whistles we had continuous honking horns as well as the lovely honking that the chicken buses use to try to solicit riders.  To add to the stress level the first 15k was very lumpy so we were going up or down – it’s never fun to be stuck in a line of cars on an uphill and have to get started on a loaded touring bike going uphill.  I admit to doing a lot of “scootering” today!

We unintentionally found a side road (ie we took a wrong turn) that took us off the major thoroughfare and once we got through an additional traffic jam around a college we seemed to have broken through the main traffic flow.  This road took us to the highway that headed toward Granada – and thankfully we were now headed away from the city.  The traffic on the other side of the road, headed into the city, was extremely heavy – there must have been at least an 8k backup to get into the city.  Wow, I don’t know how people do it every day.  We stopped for a cold drink to celebrate making it through and to let our nerves settle.

The rest of the ride to Granada was fine – we had a decent shoulder and traffic was not too bad.  It was pretty windy though, and seemed to be mostly a headwind.  For the first time in a long time we saw several road cyclists out riding and we also saw a couple of high end bike shops, so there is clearly some cycling culture here.

Based on a recommendation from cyclists ahead of us we stopped at a restaurant that was situated high above Lago Masaya.  Great views and a chance for a second breakfast – again the first time in a long time.  Funnily enough though, they had no coffee!  I am not sure why – the explanation in Spanish exceeded my Spanish skills, but I understood the ‘No hay cafe’.  There is no coffee.  So we made do with juices to go with our eggs, rice and beans, cheese and fried plantains.  The views of the lake from the restaurant were pretty amazing so it was a nice stop.  Though, both of us noted later as we were riding along that we felt sleepy and tired – maybe too much food with too far to ride… 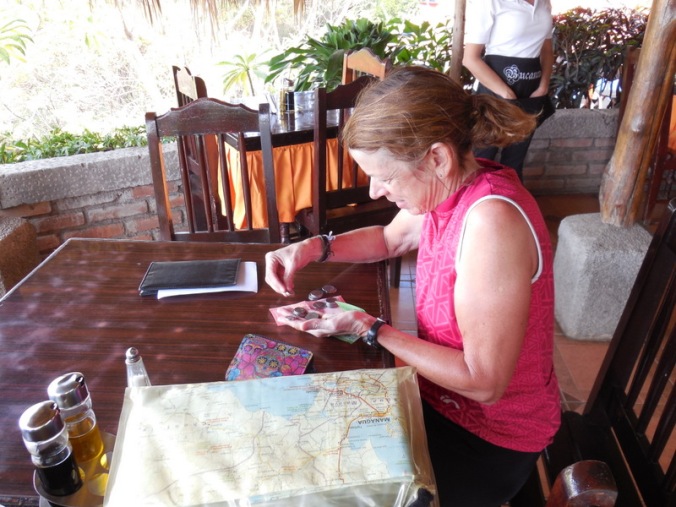 We reached Granada about 11:30 and made our way down to the central area and a hotel we had picked out.  Because it was so early we stopped at a cafe that looked inviting just down the street from the hotel and had some cold drinks.  Dave then did the rounds of several hotels near us to see what was available, while I guarded the bikes (and had another iced latte while I waited….).  I found another hotel on booking.com that was around the corner and looked interesting, so Dave did a final reconnoitre and came back with his recommendation that we take that one.  So that is how we have ended up at the La Pasada Del Sol in a nice big room with air-conditioning, two handles in the shower (meaning hot water!!), cable TV with CNN, and even a swimming pool.  And, the workers even helped us carry our bikes up the stairs to the room.  It is pretty fancy compared to what we have been staying in so we are going to enjoy it for two nights.  We have a resident gecko who will hopefully keep any mosquito population down. 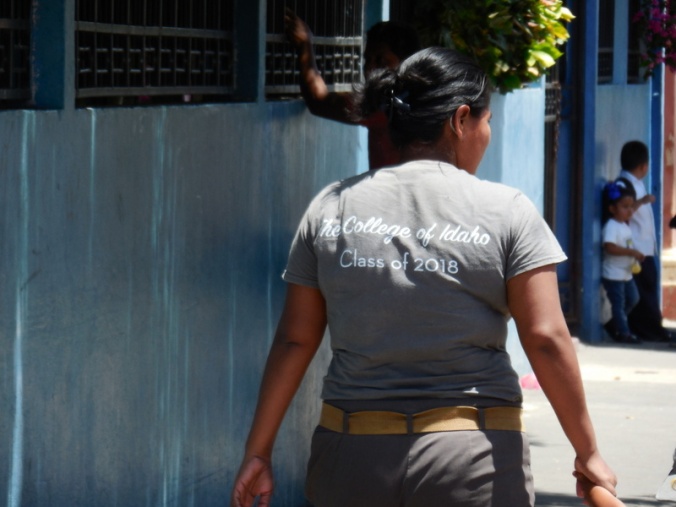 We wandered out to do a bit of exploring later in the afternoon.  We made it down to the Cathedral of Granada, where we paid the $1 fee to climb the stairs up to the bell chamber.  That gave us some nice views over the city, though the sun was a bit blinding up there.  There are lots of foreign tourists in this small city and quite a few nice cafes and restaurants to serve them.  We tried an Asian style restaurant for dinner – very tasty rice bowls with flavours that reminded us a lot of the food in Sydney that we miss.  It’s interesting as well that most of the menus we saw list the prices in US$ – they seem to run both currencies here so it would be easy to pay for most things in US dollars. 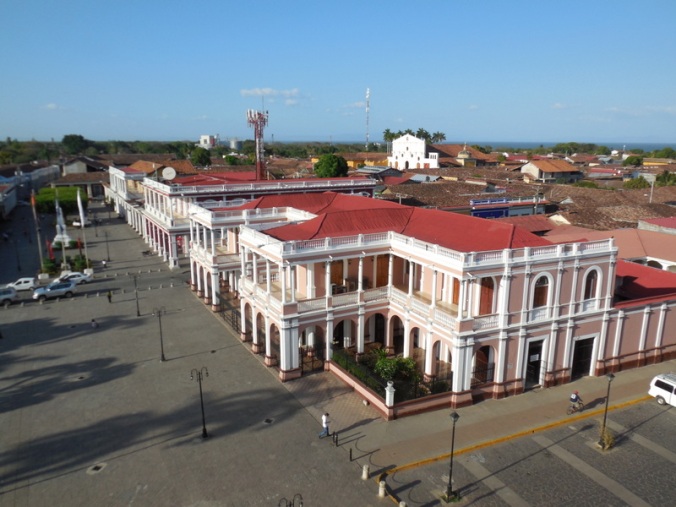 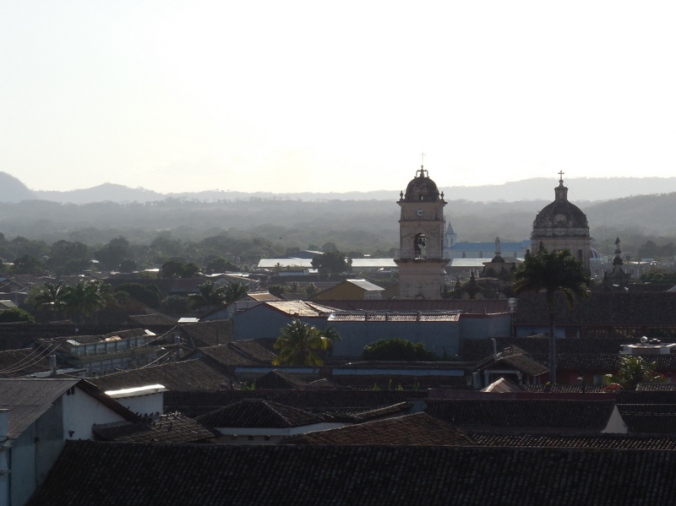 View from the bell tower 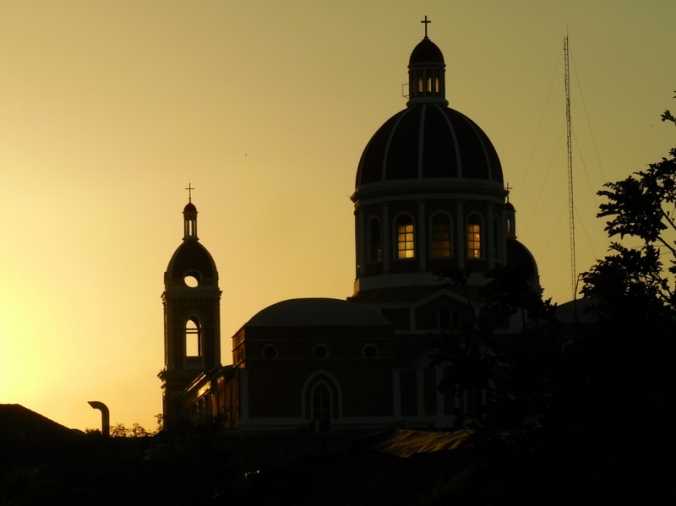 Had to try the national beer of Nicaragua – it was ok

Cross near the church 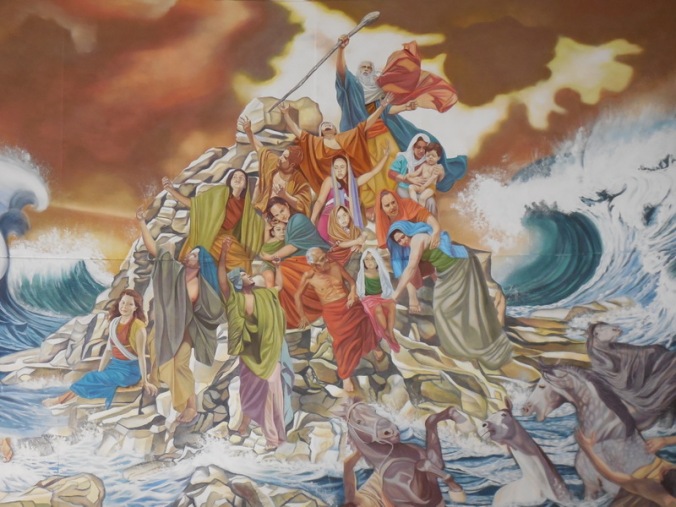 Cathedral was started almost 500 years ago, burn to the ground twice, current version finished again in 1975 – ceilings are being re-done now 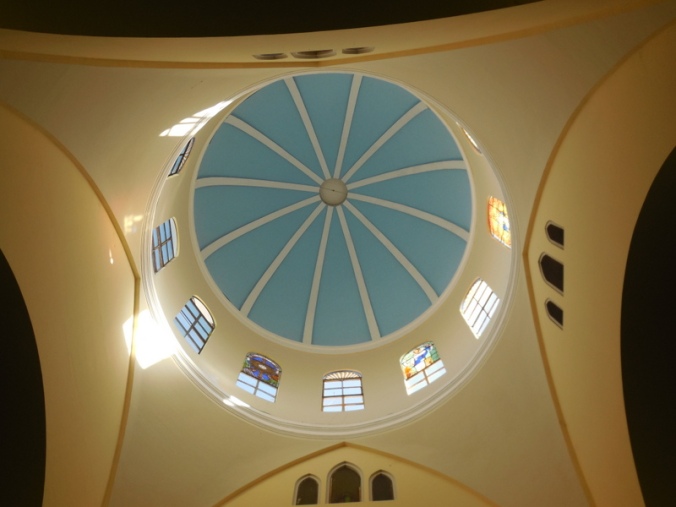 Cross from the climb up the bell tower

While we were out wandering around I found a place that does massages so I have booked myself in for one tomorrow morning.  Dave declined and said he would rather just clean the bikes.  To each his own, I guess…  We’ll do a bit more exploring tomorrow and hopefully try out some of the other restaurants – actually, I am not sure we have time for all of the restaurants that look good.  Perhaps we’ll just have to double up on meals to make sure we have tried out as many as possible.

One more sunset – just because I liked it so much