Welcome to Nicaragua – country number 7 for us on this trip.  And goodbye to Honduras after a very short visit.

We had a very peaceful night in our room last night at the Hotel Rivera – it was actually one of the nicer rooms we have been in since probably San Cristobal de las Casas in Mexico.  It was really big, with tons of room for the bikes without crowding us and lots of shelf space for all of our bags.  The air-conditioning was great, and though it did not have hot water the water was warm enough to feel good after the hot day.

We had a long day planned today with a border crossing so we were up early and on the road just after 6am.  It seems like it is getting light in the morning quite early so we may have to adjust our schedule again to take advantage of the early morning cool hours – though the alarm already seems pretty early going off at 5am!  It was pretty warm already by the time we left – over 80F so that’s another incentive to get out early.

Nancy in the sunrise

We started out on the nice smooth pavement, a continuation of yesterday’s newly paved road.  We had quite a bit of traffic, but the shoulder was pretty wide and smooth so there was no problem sharing the road.  We did see some evidence of the what was likely demonstrations in the area, with a couple of spots in road covered in burnt-out tires that looked to have been intended to be some kind of roadblock.

The port of San Lorenzo in the distance

After about 15k we were joined by two local cyclists who we ended up riding with for the next 20k or so until we reached the city of Choluteca.  Donaldo and Eraste (?) were riding from San Lorenzo to Choluteca and back, a ride they do on most weekends.  We chatted with them a bit while riding but traffic was pretty busy so we had to ride single file quite a bit.

On the way into Choluteca we stopped for photos at the Puente de Choluteca, a local landmark.  The cyclists told us was the highest bridge in Central America, and is a suspension bridge built in the form of the Golden Gate Bridge.  I am sure they told us it was built with Korean money, but none of that really meshes with info we can find on the internet.  Who knows, but it was a nice looking bridge.  The guys led us through the edge of town and right out to the road that led to the border before dropping us off at a cafe/gas station for a quick break.  It was fun to meet some local cyclists, and our interactions with them continued the nice vibes we got from the Honduran people we met while we were in the country. 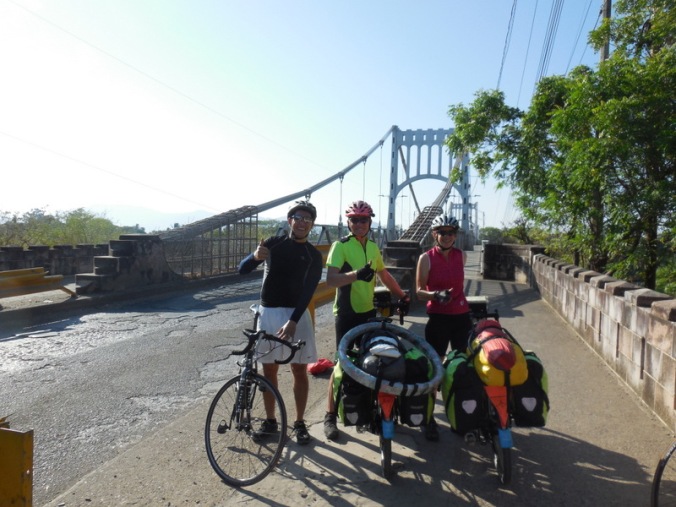 From Choluteca we had another 45k or so before we reached the Honduras-Nicaraguan border.  Unfortunately we lost our nice smooth road and had to make our way over some pretty rough surfaces.  There were lots of road workers out working on the road, so I am sure in another year or two it will be as nice as the road before Choluteca.  Right now, though, it is pretty torn up so it required lots of focus to miss as many of the holes and ruts that we could while still watching out for traffic.  That, coupled with the heat and the dust kicked up by the traffic, made the ride a bit less than pleasant! 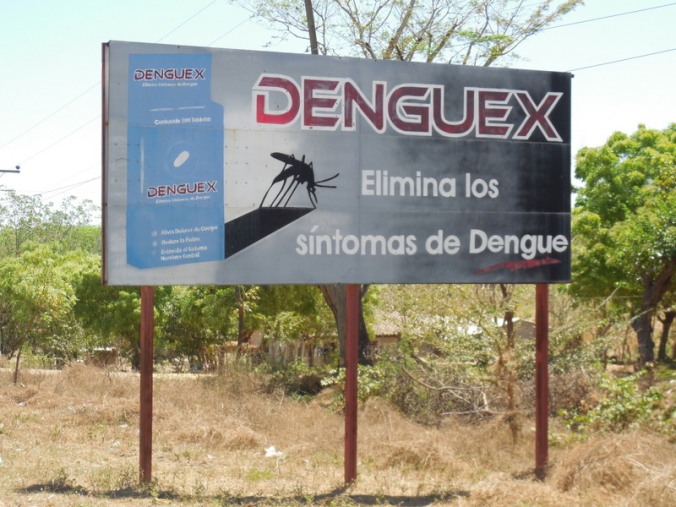 No Dengue for us thank you…

We made it to the border about 11:30 or so.  After negotiating to change some money with some very friendly money-changers, we quickly passed through the Honduran immigration process and crossed a bridge to meet the Nicaraguan immigration folks.  We (or maybe just me) were a bit apprehensive about how this was going to go, have heard some horror stories from other cyclists.  After we finally found the right place (there are very few signs and it is a bit difficult to figure out where to go), we pulled the bikes into the shade and I took the passports into the immigration office to see what we had to do. 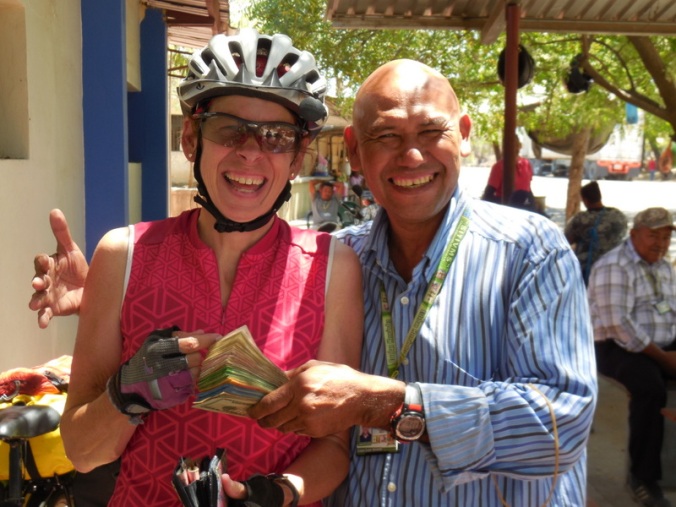 Nancy and the money changer – he took his hand off her arm after he felt how sweaty she was!

Once inside the doors I was quickly intercepted by an immigration officer who first asked if we had copies of the passports.  Thankfully we did (having heard from other cyclists that they would ask for copies), and when he asked for 2 copies (!) I had to go back outside to get the other copies for him.  He followed me outside, where Dave was waiting with the bikes.  He started to ask some questions (in Spanish, of course), and Dave kept looking at me so somehow I became the person who then had to go back into the office and answer their many questions about where we had come from, where we were going, where we were staying in Nicaragua, how much money did we have, what were our jobs, who was the manufacturer of the bikes, etc.

Actually the immigration guys all seemed to be fairly friendly, even going so far as to ask another fellow who was in the room with us (with apparently his own passport issues) to leave the room while the immigration officer asked me how much money we had with us and in our bank account.  After a few more questions, and a run across the road to a copy place to copy another form that they wanted us to fill out (2 copies, though I only had to fill in one so maybe I was just making extra copies for them…), I was told that it would take just a few minutes and to go outside to wait.  They still had our passports, so all we could do is smile and drink some cold drinks that Dave got across the road while we waited.

Well, unlike the other cyclists who spent several hours waiting, one of the immigration officers came back out to get me in about 15 minutes or so and said it was all approved.  He took me over to one of the folks sitting in the little cubicles processing everyone, I paid our $12 each and we were good to go!  Just a bit further up the road there was another little hut and another immigration officer stopped us to take the receipt and after a bit of chatting about the heat, our nice-looking Australian passports, the difference between an emu and a ostrich, I finally dragged Dave away so we could make the remaining 5k or so to town before we melted in the heat.  All in all, it was nowhere near the problematic entry that we had feared so we were both pretty happy.

There must be volcanoes here!

Riding away from immigration – yeah – only 1.5 hours for both countries

Once we got to the town of Somotillo we quickly found the Hotel Frontera, where many cyclists have stayed.  From reading other journals we knew that this hotel, though apparently the best one in town, had bucket showers and toilets so our expectations were pretty low.  Well, we ended up getting an air-conditioned room and while you do have to use a bucket to flush the toilet and there doesn’t appear to be any running water in the sink, there actually was a shower!!  We were both so excited to wash off all the dirt and sweat from a very hot day.  I am sure that many wouldn’t call it a real shower – it’s in a little brick alcove in the corner, there is no shower head, the water turns on with a PVC valve near the wall and there is no hot water (though it’s pretty warm from the sun, I think), when your expectations are as low as ours were we were pretty happy with what we had!

After washing up we went just down the street to a little cafe where we had some food and iced coffees that hit the spot.  We made a stop at a bakery for supplies for tomorrow and at the grocery store almost next door for drinking water.  The final task was to see about a SIM for the phone, as the one we bought in Guatemala runs out tomorrow.  There was a gal right near the grocery store selling Claro SIMs and recharges.  We have a Claro SIM but she didn’t think we could recharge a Guatemala number (you can imagine how hard it is to have that conversation in Spanish!) so we ended up getting a new SIM and a package that gives us data for the next 15 days (we think).

So, all in all a successful day.  Honduras turned out to be fine to pass through – we did not feel threatened, though we did have lots of folks shouting out to us (or at us) from the houses and shacks along the roadway.  The Nicaraguan border passing went relatively smoothly and we are now sitting in our air-conditioned room and Dave is watching a college basketball on TV.  (Junior editor note: perhaps we don’t need to worry so much – everything always works out great!) 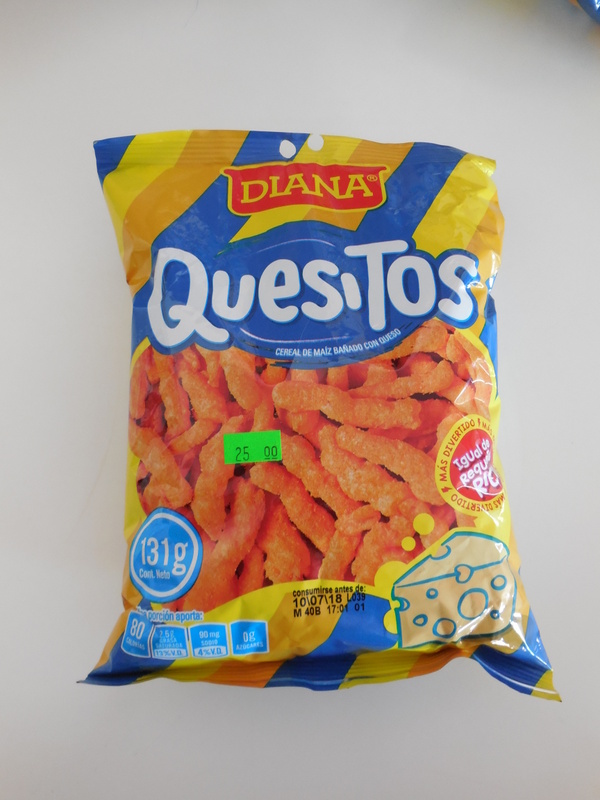 We have another long day tomorrow to Leon, where we hope to find a nice place to take a day off.  The heat is supposed to continue so we plan a very early departure – pretty soon we are going to have start going to bed before 8pm!