It was very dark out when the alarm went off at 5am this morning.  It was quiet out and we didn’t see anyone else around moving around the resort by the time we headed out just after 6am.  They were all probably sleeping in on a nice Sunday morning, enjoying the lovely resort.  Someday I’ll convince Dave to let me do that… but today we had to hit the road early to take advantage of the cooler temperatures.

Our plan was to try to get across the border with El Salvador today and we had about 60k or so to get to the border crossing.  Traffic was light and the road, while a bit rough, was certainly not the worst we have seen in Guatemala.  There were quite a few people out walking along the road or hanging out in their grass topped roadside stands. 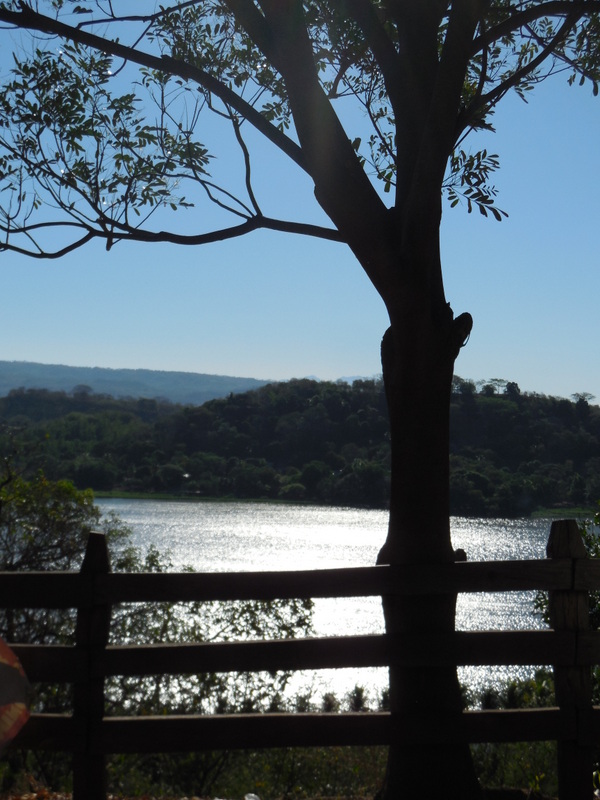 Another lake in Guatemala

We had ridden about 35k when we saw another cycle tourist coming along toward us – our second northbound cycle tourist in as many days.  Jeremy is from California and he started in Ushuaia in November 2016.  He had lots of good things to say about the countries ahead of us, which was good to hear.  He was still enjoying himself but said he was now on a bit of a schedule to get back to California and a job offer waiting for him. 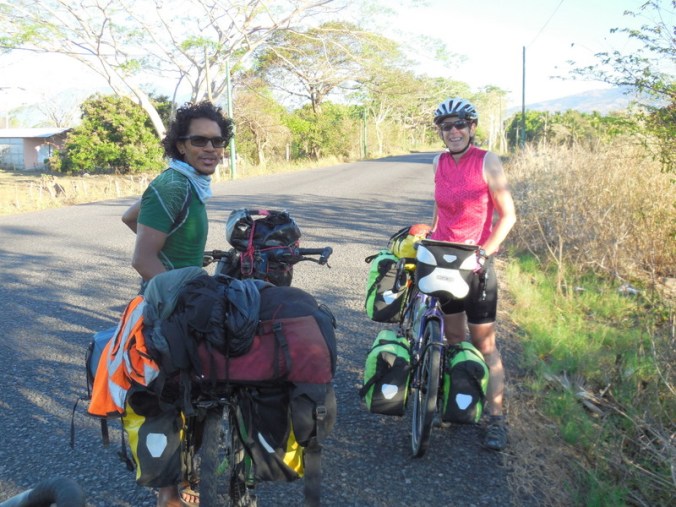 The border crossing was incredibly simple – that is, after we made our way past the 4k+ line of trucks waiting to cross.  I took the passports up to the Guatemala exit window and we got our stamps and a little card.  Then we rode about 500 meters further to the El Salvador entry area and the immigration fellow standing next to a little kiosk took a look at our passports, took the two little cards and that was it – we were in!  Just before we exited Guatemala there were some money-changers and so we changed the rest of our Guatemalan quetzales for US dollars.  Yes, El Salvador uses the US$ as its currency so we will have it easy for a couple of days at least.  It was only 10:30 but we celebrated with ice cream at a cafe just past the border.

4k of trucks to ride by 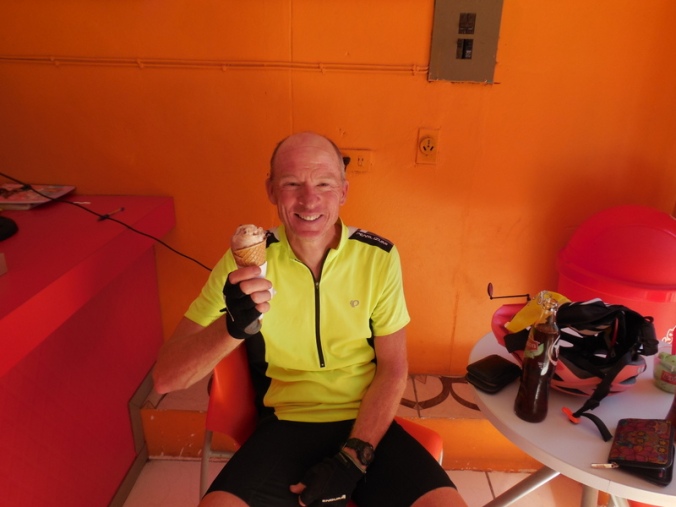 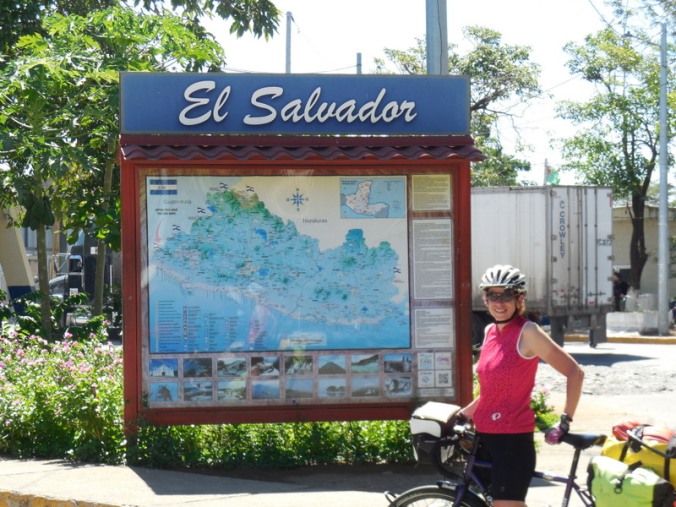 The road improved quite a bit when we reached El Salvador.  Not smooth as glass, but not nearly as bumpy so it felt great to us.  It was getting pretty hot though – I think the heat will be with us for the rest of our ride through Central America.  There were lots of folks out walking along the road or sitting in covered porches and as with the Guatemalans everyone seemed quite friendly.  Interestingly we saw lots of folks in trucks going by with various colored flags and noticed what looked like political slogans along the road.  Turns out today is voting day for something – not sure if it is a local election or something more general, but there were clearly several political parties out in full force with supporters.

No no no, vote for me

We stopped several times to get cold drinks as the water in our bottles took very little time to heat up.  It seems like we might get a few more choices of drinks in El Salvador compared to Guatemala, though it’s not back to Oxxo standards, unfortunately.  We did manage to find a phone stand at one of the stops and surprise, our Guatemala phone SIM will work here – at least that’s what we think we heard.

We weren’t too sure where we were going to end up today.  We knew there was at least one hotel down near the beach near a town called Metalio, though it sounded like it was a bit expensive.  Rather than go off down a dirt road to get to that hotel we ended up continuing on just another 10k to a junction (referred to as Kilometer 5) where we had read there was another ok hotel located.  We have ended up at the Hostal and Restaurante Kilo 5, which is a funky little hotel.  It is certainly not anywhere near the calibre of the place we stayed last night but it does have airconditioning, wi-fi, and cable tv (we are watching the Oscars at the moment) and it’s relatively clean.  No hot water for the shower, but it didn’t feel too bad after the heat outside.

In the hotel garden

We are off now to the restaurant to have our free breakfast for dinner – at least I think that’s what we negotiated.  Hopefully the cows we can hear outside our window will settle down so we can sleep tonight.  Tomorrow we are aiming for one of the many places along the beach ahead.  We are not sure where we will end up – depends a bit on availability, as this area of El Salvador seems to be a popular surfing place so we may have to try a few places to find a place with some availability.