We had another hard day climbing through the Guatemalan mountains today – I think Dave is trying to run me into the ground with his route planning!  5,600 feet of climbing today and 4,500 feet yesterday.  Dave has already given you the “how hard that is on a touring bike” story.

Our hotel last night turned out ok – we thought it might be noisy as there seemed to be some kind of event going on when we checked in but it must have finished early as we didn’t hear anything later.  We were up early and on the road before 7, making our way back out to CA-1 (the Pan-American Highway) from town.  We had a nice start once we got to the highway, with about 7k of relatively flat riding and then a 5k downhill.  Then the climbing started and we didn’t really get much of a break until the last 15k or so, when thankfully we got a downhill into our final destination (other than a final sharp climb to make sure we were good and tired).

View of San Cristobal, near the end

We had some pretty steep patches today but the condition of the road made the ride a lot harder than it would have otherwise been.  The road was in very poor shape, very rough and lots of places where there were huge potholes and missing asphalt.  It was amazing to watch the cars and trucks navigate around the holes.  It was clear that many had driven the route often as they practiced their rally-car driving skills to miss as many holes as they could.  It was a bit confronting to look up as see cars coming at you on your side of the road as they tried to miss holes on their side.  They were good about moving back over in time though. 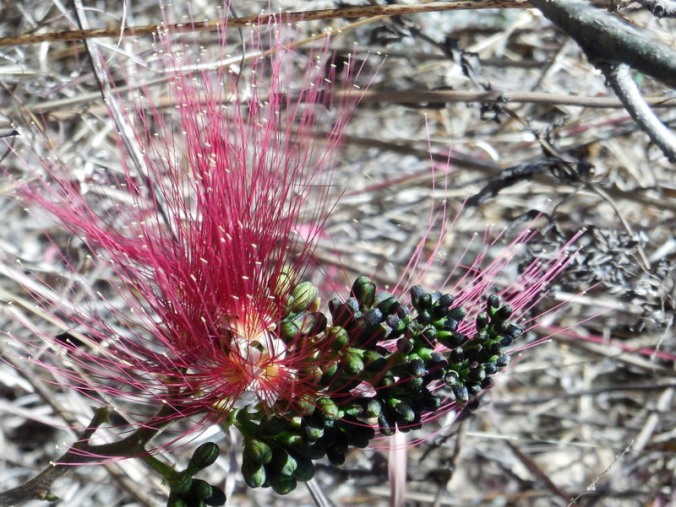 New flower seen on climb – for Pete – the red bits come out of the green balls but seem to die quick.  We didn’t see any with all the red bits out and not all wilted

The route today was dotted with little villages and houses almost the whole day – it seemed like we never really got away from civilisation.  Mostly small little settlements with very basic housing, though there were a couple of more substantial villages along the way.  We were able to find places to buy water and drinks to keep us going.  Lots of kids were out playing and would yell at us as we went by – we heard lots of ‘gringo, gringo, gringo’ today.  They were all friendly, and would often run along with us as we slowly made our way up the hill.

Our road and a village with no road access 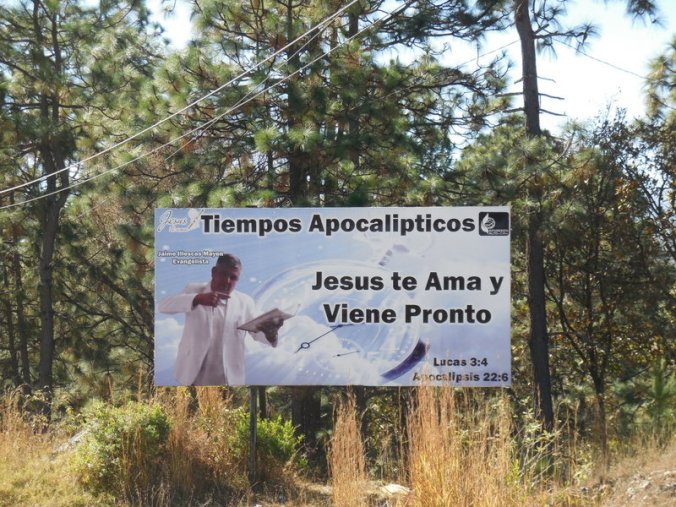 The end is near – how my legs felt at times today 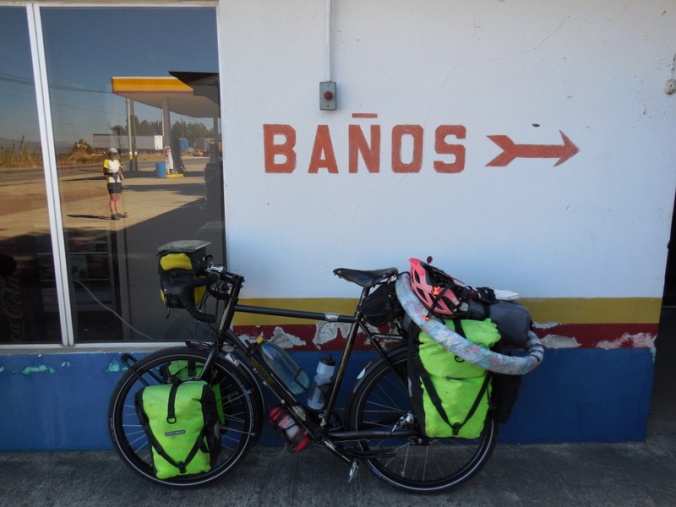 Rest break – Toilets to the right, Nancy to the left

Traffic was pretty heavy much of the day and we got the full flavour of the big chicken buses that run here.  They drive amazingly fast and on many corners it seemed like the bus was close to tipping.  I am sure they know how to drive these roads but wow, I would not want to be on one of those buses!  And they usually seemed packed with people.  Today we watched one bus stop to pick up a woman and as they started to drive off someone realised they had left her large bag of what looked like corn sitting by the side of the road.  The back door of the bus opened and a guy jumped out (while the bus was slowly moving) to run back and pick up the bag.  It was clearly a heavy bag as he struggled to pick it up and then proceeded to run toward the slowly moving bus (with the back door wide open) to try to catch back up with it.  Another fellow jumped out the back door to help him, while the bus continued to slowly proceed.  It was pretty wild – we think they did eventually get back on the bus. 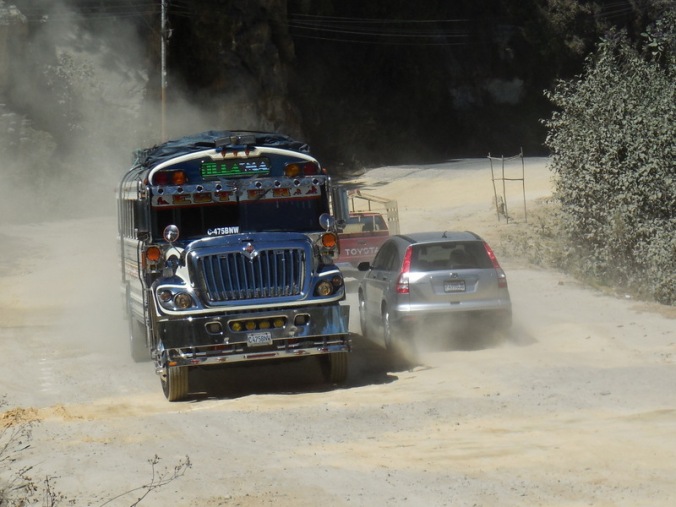 Chicken Bus on our side of the road

An older Chicken Bus – no wait, I think they are all old USA school buses

We saw lots of stands today that were all selling what looked like watermelon, though they were huge and lighter green colour than watermelon.  We finally stopped at one for Dave to take a picture and a lady came over to chat.  She called them chilacoyote or something similar and said they were white inside, not red.  They were all over, so it is clearly the season for them.  We think they are these: https://en.wikipedia.org/wiki/Cucurbita_ficifolia.  They were way too big for us to buy one but maybe we’ll have a chance to try one before we leave Central America.

Too big for our bikes!

We finally arrived in San Cristobal about 3pm and made our way through a wild traffic corner to the Hotel Reforma.  It’s a bit of a rough hotel but there doesn’t seem to be many options here.  There was a nice looking hotel coming into town but it looked to still be under construction and we couldn’t find anything else on line so here we are.  There’s a bed, we had hot water for showers (though it did leak all over the bathroom floor) and there is wi-fi so it will do for the night.

We can here the traffic a bit – the wild corner is a major intersection of several roads and all of the chicken buses seem to stop there to pick up passengers.  And they don’t just pick up passengers, they yell, honk their horn, and try as hard as they can to convince people standing around to take their bus versus another bus that might be there.  It’s quite a show to watch but the noise is pretty deafening when you are right there.  Our room I think we are tired enough to sleep through it – we’ll see. 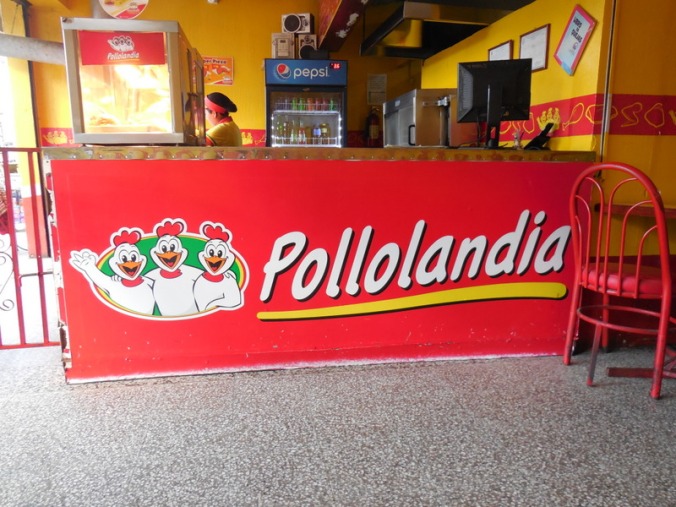 We had dinner in Pollolandia – it was ok, but not photo worthy.

This gal sold us bread for tomorrow’s lunch.  I liked her dress and she was happy to poise for us.  People are supper friendly here.

Tomorrow the plan is to head down to Lake Atitlan, one of the places that many recommend visiting.  We have another steep climb for the first part of the ride, then there is a big downhill to the lake.  We plan to spend a couple of nights there to enjoy the lake.  Then we have to figure out how to get back out – unfortunately there’s no easy way back out to keep us on our route to Antigua.  Dave is sure he can get us a ride back up to the Pan-Am highway so I am planning to hold him to it.