Country Four Guatemala – we made it!  Woohoo!

But before we get there, we should talk about last night and the ride today.  Last night we had our last meal in Mexico.  We had some extra pesos so we found a kind of nice restaurant.  Too bad we were both so tired, we couldn’t muster up the courage for a glass of wine.  Dinner was nice but the complementary appetiser was the real treat.  The photo below is our “one chip” each and in the middle, there is some chapulines.  We had to ask twice and I tried it before we got the translation.  Yup, it’s grasshoppers.  They weren’t too bad but really, this was supposed to be a fancy restaurant and they served us bugs!  All part of the experience… 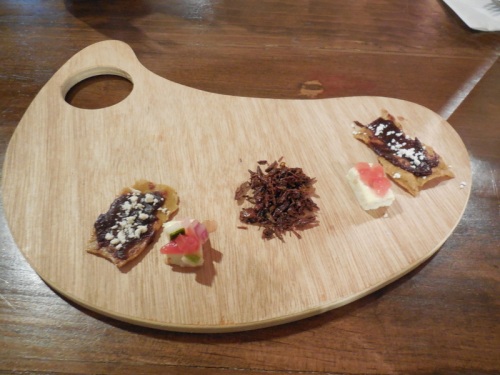 We were up early this morning again.  We had a long day planned, along with two borders, a money changer and with luck we’d get a new mobile phone SIM.  We woke the night man at the hotel loading our bikes in the lobby and were on the road before 7AM.  Traffic at this hour on a Saturday morning was very quiet.  You could tell it would be crazy on a weekday during rush hour.

We stopped on the far side of town at Walmart to buy some peanut butter.  Nancy insisted that I buy 2 jars as for some reason she doesn’t think that there will be peanut butter in Central and South America.  For what it’s worth, we found some in the first store we stopped in tonight in Guatemala.  Oh well, better safe than sorry and I like carrying extra food up hills, like we have tomorrow. (Senior editor’s note – just for the record, he never complains when he eats his PB&J sandwiches for lunch…)

The first 20k were kind of rolling but generally downhill.  We had a slight tailwind as well.  So progress was good and complaints far and few.  Rain was in the forecast for Comitan but all we got were dark skies.  At about the 20k mark we hit the big downhill of the day and the sun came out.  We had a ripping 20k ride down from the mountains to the lowlands.  We could sure feel the heat and stripped to just summer gear after morning tea at another Pemex.  And to kill the suspense, it appears that the Guatemalan equivalent of Pemex is called Puma – later after we crossed the border we saw the ubiquitous Pemex colours with a Puma sign.

Highway of the frontier (border)

Not the same kind of tree but Pete wanted more flowers

On the Autopista – Guatemala looms

Onward we rode to the border.  When we arrived, there was a minivan full of gringos trying to exit Mexico just like us.  They had not done their research and were running back and forth across the road to the bus station where they had a printer, to get flight information printed and so on.  It took them quite a while to get things sorted which gave us plenty of time to worry what we might have done wrong as well.  Worries wasted, when our turn came, we completed the exit process in a matter of minutes.  We didn’t have to pay anything as the fees we paid and the forms we completed on the way in covered everything (good job Nancy). 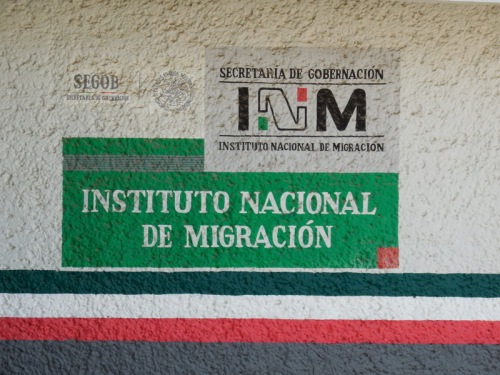 We ate lunch and got some water at the immigration point.  By now it was actually getting pretty hot – my computer read 40 degrees.  We had a bit of slog uphill to the Guatemala entry station.  The road was not great but traffic was much lighter than we thought it would be, this whole “mile long line of cars and trucks” story was a complete myth.  As we neared the actual border the roadside got more and more crowded with side by side shops and stores.  The road was full of people, tuk-tuks, shops extending out past their edge and of course cars going both directions.  It was pretty chaotic but the light traffic again helped keep things manageable.

We were looking for a money changer before the border but didn’t find one until we were actually right at the line.  There were a couple guys there “helping” folks like us get to immigration.  One guy became our friend and led us to the right door.  Nancy went in with both passports and got us each 90 day free Central America stamps (they didn’t even need to see me).  When she came back out we had to do the business with our new friend.  He offered us a fairly low exchange rate to start with but after some back and forth, we got him close to what we thought was right.  We probably lost a few bucks in the exchange but it’s all part of the adventure as well and most importantly we got rid of all of our Mexican pesos (which you apparently can’t change at the banks) and we had Guatemalan Quetzales.

The roadside shops and craziness continued as we climbed up further away for the border into the town of La Mesilla.  After a bit we spotted a Claro phone stand and managed to get a SIM with some sort of data plan.  The girl working the stand didn’t speak any English but the chap running the shop next door was very helpful and talkative.  We sort of drew a crowd of helpers but no one really spoke much English.

Our Spanish is getting better but there is so much specific dialog at a phone shop…We think that the plan was only good for 3 days so we pulled into the next shop to verify what we got.  They didn’t speak much more English there but we somehow managed to get a 15 day plan and more data for not much money.  So, we should be set.  Although, we are not sure what our story on calls is.  We didn’t think we could call the USA but I test called my Mom there and it went through.  More study is required.

Our first of many helpful Guatemalans – at the phone stand

The climb after the border went up a good deal more after town but soon the shops disappeared as we had quiet road again.  The Guatemalan mountains were kind of looming off the right now but we knew that we wouldn’t have to really tackle them until tomorrow.  All we needed to do now was to reach the next town and find a hotel. 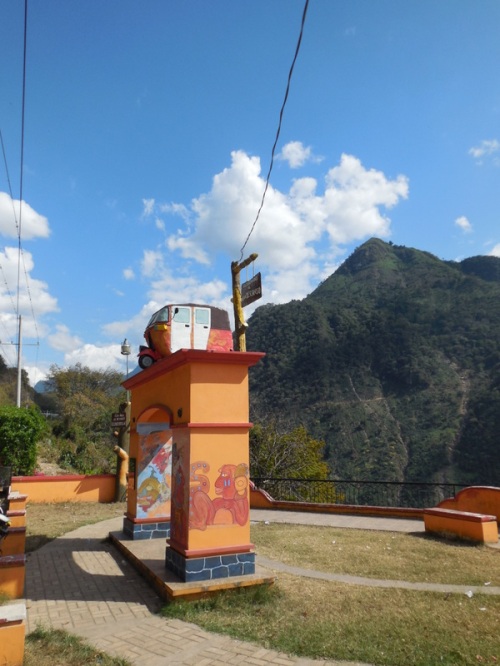 Monument to the tuk-tuk – hmmmmm 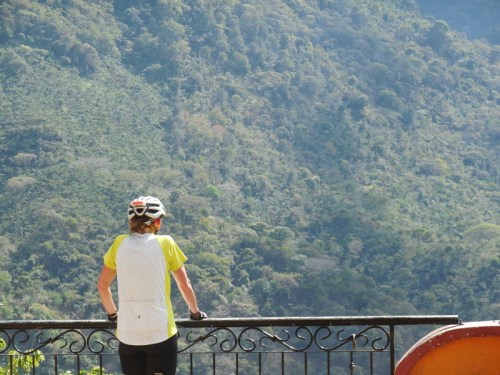 We saw quite a few of these signs in Guatemala – nice

On the climb – Guatemala mountains

We rolled into Camoja at about 3:15.  We heard that there were hotels here but everything we found looked pretty dodgy from the street at least.  This is basically a one road town, with the PamAmerican Highway being Main Street.  Having the choice to ride 5k more uphill without being sure what might be available or stay here led us to looking at the Hotel Sarita, just to see if it was as bad in as it looked from the outside.  Nancy did the checking and wow, what a difference – it’s more than adequate but you had to get past the front door to know it.  We have a decent size room, pretty clean, hot water for showers, the bed seems comfy and it seems like it will be quiet as we are downstairs away from the busy road.  And we got to roll our bikes in.  The only downside is that the Wi-Fi is not working right now but we can live without it for a day.  The Hotel Sarita is right next to the Taco stall Sarita, the Restaurant Sarita, the Auto Parts store Sarita, the Mechanic Sarita and the auto detail shop Sarita.  All we needed was the hotel.

After showers, we walked up the road a couple hundred metres to a panaderia for supplies for tomorrow.  The woman there was super helpful.  Everyone we walked past said hello as well.  We loved Mexico but if anything, so far the Guatemalans are even more friendly.  We stopped on the way back for dinner and mistakenly over ordered.  Nancy ended up with a plate of rice that would feed a large family.  I had eggs and chorizo.  Everything we ordered was very tasty and even with the double orders, it was all of $14 for the full meal. 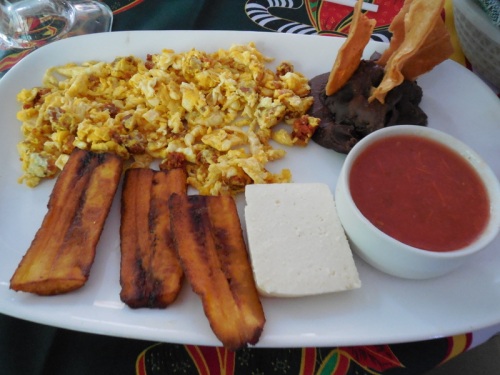 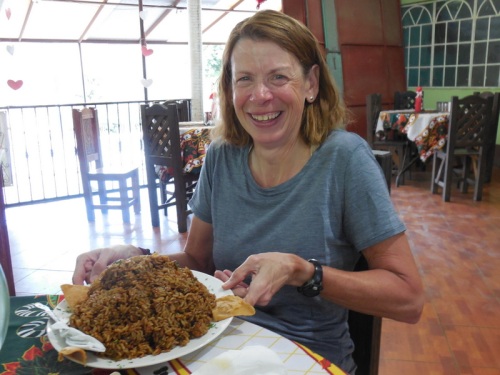 Serious, who could eat that much rice!

We have a shorter day tomorrow but it’s all uphill.  Those Guatemalan mountains are just waiting to be climbed.  We’ll be lights out early tonight!

This entry was posted in Americas trip, Guatemala. Bookmark the permalink.