If Disney were to design bike routes today would have been one of his best.  We started the day with 40k of rolling terrain up on the ridge tops of Sequoia and Kings Canyon National Parks.  It was at times cool with mist rolling over the ridge tops.  Then it was almost hot when the sun would break through.  We rode up and down, in and out of the clouds with ever-changing views of either distant ridge tops or close in groups of trees.  Every now and then, there would be a group of sequoia trees, clearly identifiable to us now by their otherworldly “puff-like” tops.  From a distance they look almost like giant forest creatures, each with personalities of their own – it is not clear if they are proud or shy peaking in and out of the clouds.

Sequoia in the mist

That was the first 40k –had we stopped there, it would have been a pretty cool day.  At 40k we pulled into Lodgepole Village – part of the Park’s set-up.  It was full of people milling about and gave us both a weird vibe.  The full campground sign was all we needed to decide we would push on down the hill and out of the park to Three Rivers.

Who knew, camp for organization – Nancy loved this one 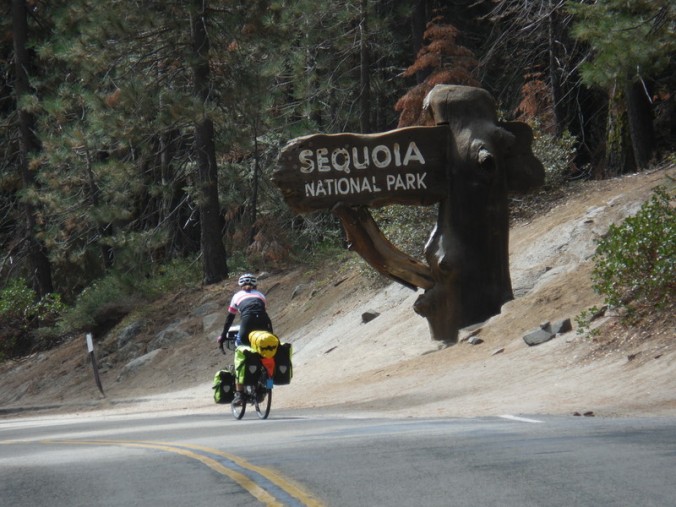 So we hopped back onto Disney’s ride.  Our next stop was the Giant Sequoia Grove and the Sherman tree.  We got off the bikes here and strolled to Sherman – the biggest tree on earth (big by volume, not height – redwoods are taller, but sequoias are bigger in volume).  They’ve done a great job helping people on foot see this tree, and a bunch of big trees around it.  But for us, the real fun came when we got back on our bikes and headed out and down through the rest of the grove.  We had corner after corner of massive trees, all at gentle downhill coasting speed – our necks were sore from looking up.  Just when you thought it couldn’t get any better, we came upon four giants too big to cut down, right where they wanted the road to go.  What to do but split the road into two lanes and weave through the middle of the trees. 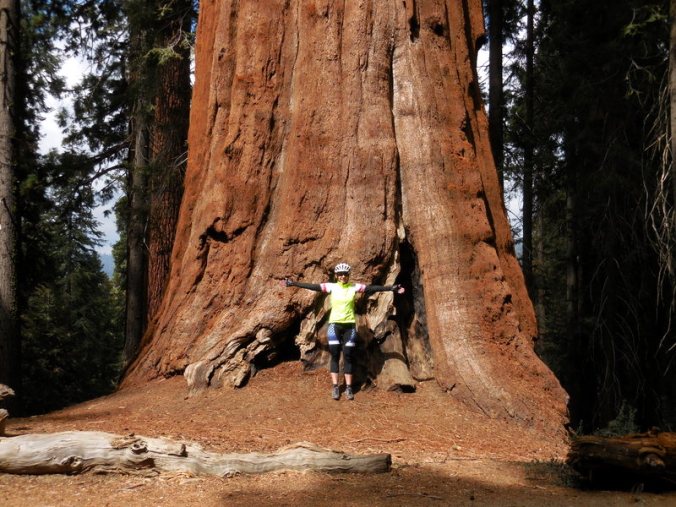 Not Sherman but a big tree 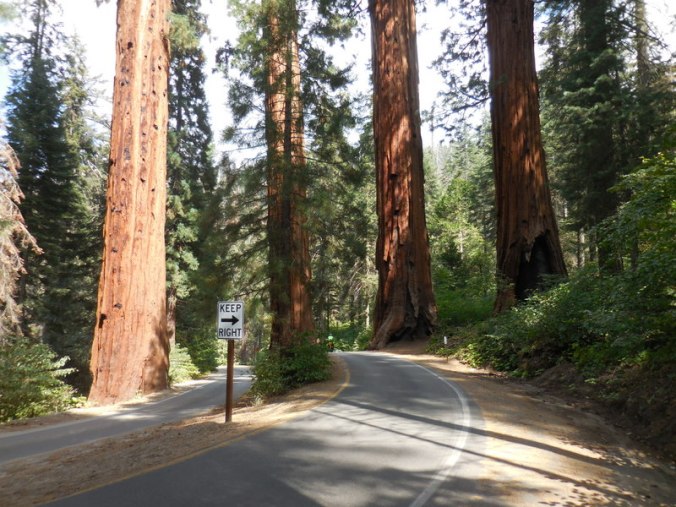 Big trees in the way, no problem, just build around them

Big trees and the sky

Sherman in the distance 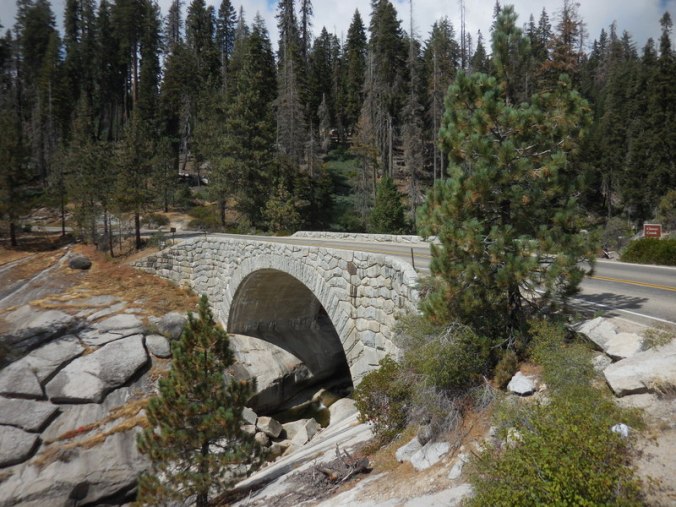 Restored bridge on our ride

We eventually got to low enough elevation that the really big trees didn’t grow and arrived at what was billed as “road works with up to an hour’s delay”.  We timed it perfect and only waited 10 minutes – we got to go last meaning no traffic behind us for the downhill.  From here we were expecting “some downhill to Three Rivers”.  Boy did we underestimate that one.  The downhill turned out to be one giant bobsled run racing around 3,000 vertical feet of steep mountainside.  At times we could see eight to ten switchbacks laid out below us.  Every corner was a hoot of fun and “wow, what a ride” yells back and forth.  Brakes were in full use as it was very steep – we got sore hands and faces (from smiling). 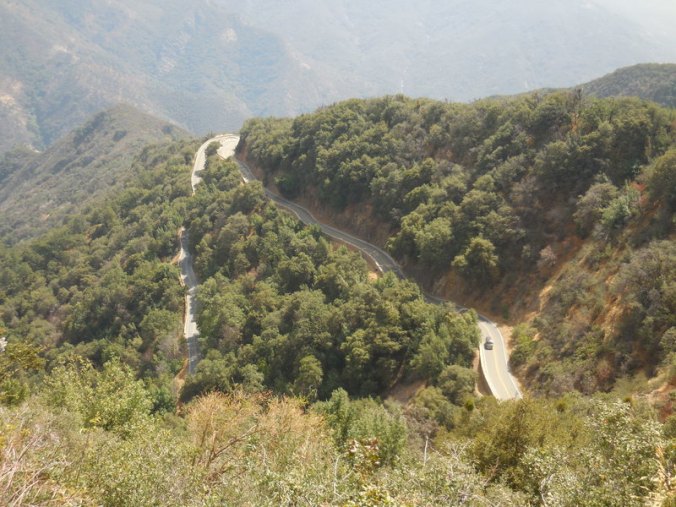 We had miles and miles of this – woohoo

We stopped midway down to take some pictures at a pull out, and to let o our brakes cool.  We were both pretty excited and quickly engaged the folks at the pull-out.  We were greeted by a very friendly woman named Gloria, there with her husband and parents.  Gloria’s side of the family is from near Mexico City and she was very interested in our story.  She took our card and offered to hook us up with friends once we reach Mexico.  They also offered to have us stay with them if we go through Longbeach – it was a great interaction, and if it’s any indication of the friendliness of the Mexican people we are in for a great trip through Mexico.  Gloria, if you are reading this thanks for coming by to say hi – you really made our day!  Nice folks and a great downhill – nice work Mr Disney.

Dave, Gloria and Nancy (taken by Gloria’s husband – sorry we missed his name)

The last half of the downhill was just as good as the first half, only now it was starting to get warm.  We were starting to take layers off now for the first time in the day.  Eventually the road flattened, but only a little, and we had a nice slightly downhill finish along the Kaweah River.  I kept looking around for a ride attendant to give ride tokens to.  Wow, what a ride that turned out to be.

Just before the town of Three Rivers we pulled into Kaweah Oaks campground – just to top off the day, it’s a bicyclist-focused campground.  They allow cars but prefer cyclists and give us a special rate.   Completing the theme park feeling, there was an ice cream parlour right across the street.  As we are just big kids on our own Disney ride today, we decided to have ice cream before eating dinner – “shh” don’t tell our mothers.

That gets you to the end of the day.  I should make a note about the beginning and last night as well.  We saw a couple of cyclists pull in to the park last night – they didn’t see us.  So after dinner, I went looking for them, only to find Fredrik (from Italy) again.  He had his bike and gear stolen a few days ago, got it back and helped the police solve the crime all in one day (almost like a CSI episode, catching the thief wearing his very unique board shorts in a bike shop!).  He had a couple big days riding to catch up with us, arriving with almost 7000 climbing just as it was getting dark.

I spent so much time chatting with Fredrik that I didn’t find the other cyclists.  Not to worry as this morning, they found us.  Meet Marshall and Roger from Tennessee.  They are riding from Seattle to San Diego on about the same route that we are.  We had a nice visit with them this morning at the campsite.  All three of them and us are in Three Rivers tonight.  We are meeting Frederik for brekkie tomorrow – then we are heading to Porterville and a Warmshowers host.  We may not see the guys again after that but you never know.

I know I can’t have it every day, but if every tenth ride is as fun as today, well, I guess that’s why we ride bike eh?