Normal programming returned today – we saw people and cars.  Not many mind you, but at least some.   It did take some time, in fact, we were riding for just about an hour when the first car of the day passed.  And before I forget, we did get rained on last night.  The storm we watched coming towards us kept coming.  We didn’t get just rain, but thunder and lightning as well.  It lasted all of 20 minutes and then the stars came out.  Yes, it was an exciting night in Trimmer, California.  No people, but our first rain since Northern BC.

This morning was quiet, except for the garbage pick-up truck that came into camp to empty the dumpster.  It was already almost empty, because as I reported earlier, there are no people here.  But he had a schedule and was going to fufill it regardless. 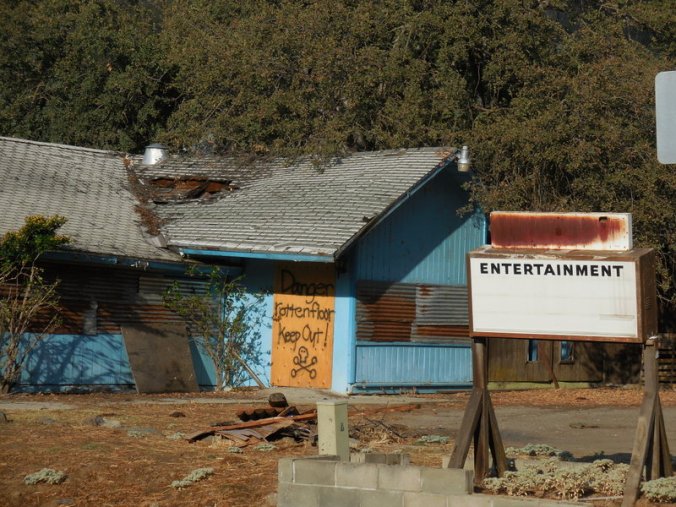 All that is left of Trimmer

The ride around the rest of the lake was mostly rolling. I don’t really think you should call it a lake.  It’s really just a big watering jug for the San Joaquin Valley and all the fruits and veg that they grow.  When we finally reached the bottom of the lake and saw how much water was heading to the valley, we got a better idea of the scale of the farming.  We are doing our best to stay in the mountains but it would be interesting to see some of the valley at some point.

Nancy riding around the lake

We found a store at the end of the lake.  It was the only one open for miles.  Most of the resorts were closed or abandoned.  The woman working the store said that “summer was over” so things shutdown – no kidding.  But at least she was open so we could fill up with clean water – the campground water was not too tasty. 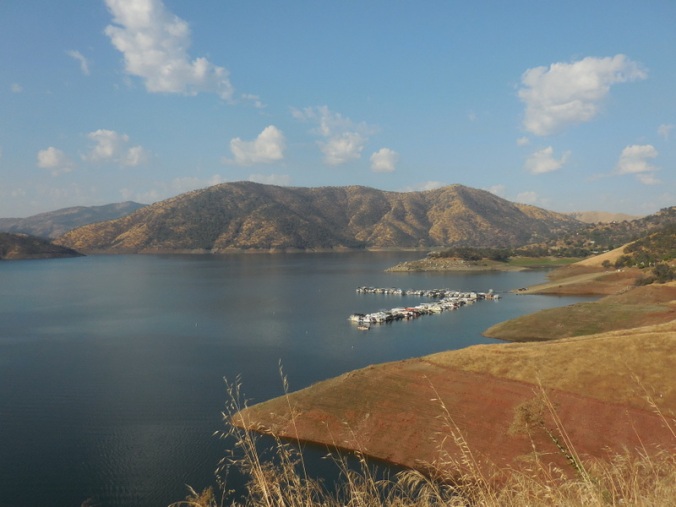 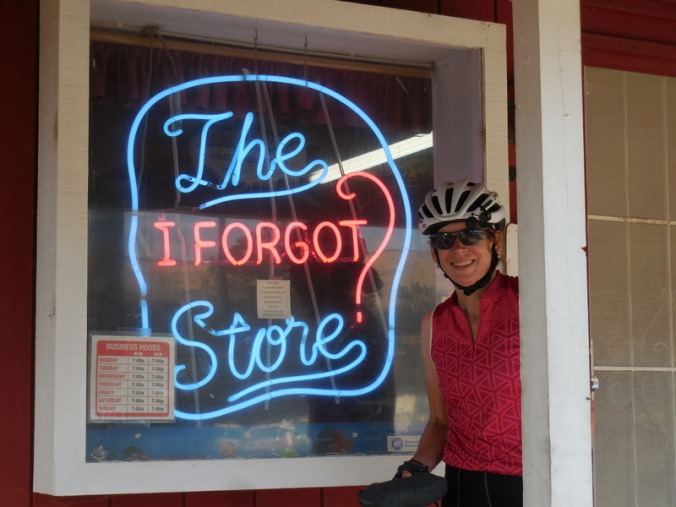 The only sign of life around Pine Flat Lake

We rode off the lake to get around the dam, then we had to ride back up to the base of the dam.  And eventually we had to ride all the way back up the top of the hills where we had started – just on the other side of the lake.  And boy, what climb that turned out to be.  We were in 1st gear for most of the 5 mile climb.  Near zero traffic made us doing switchbacks possible – or we might have had to walk.  We were dripping in sweat by the top and really ready for lunch and to call it day when we reached Squaw Valley.

Lunch was easy, one mile back up highway 180 we found a highly recommended garage/pizza parlor.  It was better than it sounds.   Finding a place to stay was quite difficult.  There are no campsites near Squaw Valley.  Google Squaw Valley and you get the one near Lake Tahoe, not the one near Fresno.  We found a dive hotel but it was booked out.  I found something on AIRBNB but it was not clear where it was located.  So, what else to do but pull into the nearest realtor’s office.  When in doubt about what’s in an area, always ask a realtor.

They were very helpful and told us about another hotel just up the road.  Up is the way we have to go for tomorrow so a little headstart on the next day’s climb was all good.  Just as I was ready to call the hotel, the AIRBNB folks responded and they had room – we jumped at.  It was at an organic farm a little further than we wanted to ride but they also offered us dinner – done deal.

The ride to the farm was great for about 11 miles.  Sure, it was uphill but there were also some little downhills to give us a break.  We even found a servo to get cold drinks at.  While at the servo, the owner of the farm came in – he spotted us (a mile away) and introduced himself.  We were looking forward to the last bit of the ride.

About a mile from the farm, this all changed.  We could see a road heading straight up hill and thought “no”.  Well, it turned out to be yes.  Wow, that was a hill – one mile at over 10% grade and steep pitches going into the mid-teens.  I was in serious husband jail – only getting out when I’d stop to come back and help push Nancy for a spell.  It took ages but we made it.  We were both completely shattered.  But we were “early” as well.  Fred, the owner, said we beat his estimate by about an hour.

Husband jail was avoided only because the place was super cool.  Fred and Ai are trying to live off the grid and open their home to tenters – they provide tents.  Ai was born and raised in Japan and cooked up an amazing feast for us to eat.  They have a funky outdoor shower and fantastic views across the hills – plus a composting toilet “up on the hillside”.  It may not sound like the climb was worth it but it was – at least that’s my story.

Our AirBnB find in the hills above Dunlap

Part of our delicious dinner – plus barbecued fish 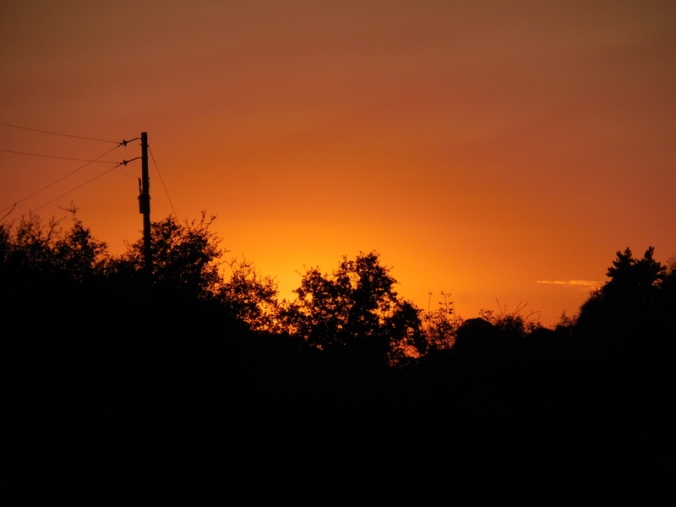 We have about 19 miles of climbing left for tomorrow to reach Grant’s Village in Kings Canyon NP.  We should be there by noon – he says ignoring his tired legs.  Oh well, that’s tomorrow.  Today is done and we did it together – wow, what a day.  (Senior editor’s note – 4348 ft of climbing today.  Gosh, tomorrow is only 4000 – yoohoo….!  I am building up credits for a couple of nights in a nice hotel, somewhere down the road I think.)