Another quiet, bear-free night in the campground last night, notwithstanding the warnings from the campground staff when we checked in.  We were supposed to have a sleep-in, as we had a short day planned, but Pete was up with the sun so we got up to join him for a cup of camp coffee (we declined the PB&J with Lays potato chips that Pete snacked on with his coffee).  We decided to splash out on breakfast at a coffee shop in Truckee rather than make breakfast in camp, so we slowly packed up and made our way out of the campground.  It was eclipse day, so we were happy to see that the sky was relatively clear – maybe we would have a chance at seeing something.

Last night when we came into camp it was threatening to storm, with a few raindrops coming down so we passed by the memorial for the Donner party that is up at the entry to the campground.  So, on the way out we stopped to take a look at the large statue that was erected to honor the emigrants that made their way west.

After stopping at a coffee shop for some good coffee and food we continued our way along Highway 89, following the Truckee River upriver while we waited for the eclipse to pass through.  We pulled over off the road about 10:20 to prepare for the big event.  We didn’t have any of those fancy glasses so couldn’t look at the sun, so we tried one of the old-fashioned ways to view it – we tried to make little shadow crescents with our fingers on the pavement.  It worked a bit, but it turned out to be a non-event.  There didn’t seem like there was much change in the light – just a bit more haze for a short time.

Eclipse shadows made by hands

Our route took us by Squaw Valley, home to the 1960 Winter Olympics.  We made a stop for a few photos, and from there we hopped on to the bike path that runs right beside the river.  It was a bit slower than the road, but we were in no hurry and it was nice to be off the road for a little while.  We hit Lake Tahoe at Tahoe City, where the only outlet to the lake is found, into the Truckee River.  In the early 1900s a small bridge and dam was built over the opening to help control the water levels in the lake and into the river.

Us at Squaw Valley

The bridge, known as Fanny Bridge, is commonly thought to have been named because of all of the fannies that drivers saw crossing the bridge, as people stared over the bridge at the water.  In fact, based on info at the bridge it was named after Fanny McGillicuddy Wilkerson, who was apparently the aunt of the foreman of the crew that built the dam.  Regardless of the origin of the name, it is an amazingly small little dam and bridge for such a huge lake – particularly given it is the only one for the whole lake. 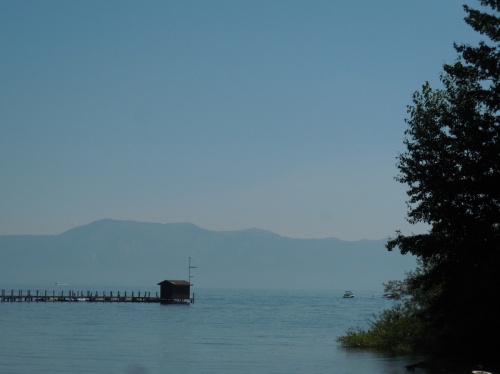 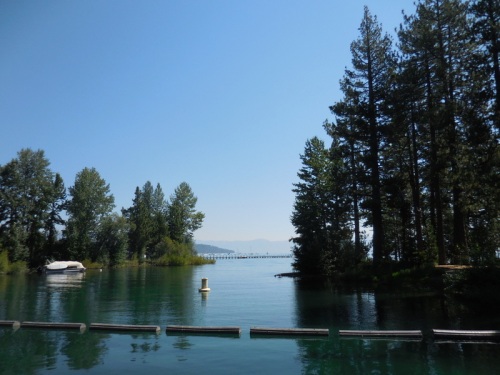 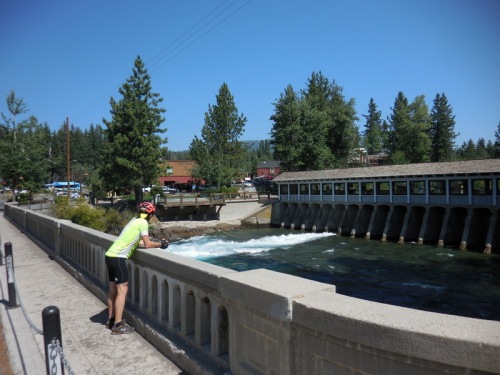 It was almost time for lunch by that time, so we made a strategic stop at the next waterside cafe we found – Jakes on the Lake.  It is a popular place but our timing was just right and we beat the crowds and got a nice table in the shade for a lovely lunch overlooking the water.  It was nice to relax, knowing we had such a short day and a hotel already booked for us in Kings Beach (thanks Pete!).

A few miles out from Kings Beach, on our final section of the bike path we passed a driveway with a car parked on it.  As I rode by the person in the car honked repeatedly – I couldn’t really figure out what the issue was, as the bike path had the right-away.  I just kept riding, but I could hear the horn go again when Dave and Pete rode by.  Pete yelled at the guy, and then made some questionable hand gestures, while Dave tried to get him to back down a bit and just ride on.  Well, big surprise – the honker turned out to be Dave and Pete’s old friend Hank!  Pete and Hank arranged this surprise visit, and had been texting each other to try to get Hank to a place where we would ride by.  (Junior editor note: Hank was driving his Mom’s 1985 Pontiac Parisienne – a car that really made him seem like a “grumpy old man” car driver – good one guys, you got us good!)

After a brief chat with Hank we continued on to the hotel, got checked in and cleaned up and then met up with Hank for a beer to catch up.  Hank offered to carry our bags back to Carson City, meaning we would have relatively light bikes for our climb from the lake over Mt Rose tomorrow, so of course we took him up on his offer!

After Hank headed back, Pete and Inge’s daughter Carson arrived from Reno to join us for a nice dinner at Lanzas, an Italian restaurant walking distance from our hotel.  I am not sure we rode enough today to justify a nice lunch and then a nice dinner, but I had no trouble eating it all – even the spumoni ice cream for dessert!

A final dip of the feet in the lake before bed topped off a really nice day – not really a rest day, but a pretty good day all the same.  Tomorrow we are headed to Carson City and Dave’s mom’s house for a good rest.  There’s just that little hill to get over before we get there….