We had a cool night overnight – this morning the temperature on my computer read 47F and Dave finally had to dig out his coat while we made breakfast and packed up camp.  We left the McCloud RV Park about 8:30, being careful not to leave any mess or smudging of the grass, so that future bikers were not barred from entry!  Dave stopped for a few quick photos of Mt Shasta in the morning sun before we took off down Hwy 89. 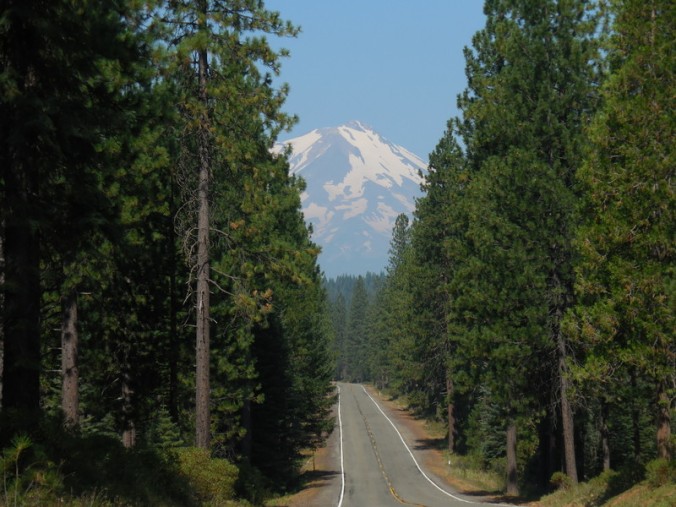 The pundits were right about the state of the road – the shoulder was minimal to non-existent for much of the day.  We kept an eagle eye on the traffic and pulled off a few times when cars were coming from both directions.  Actually the traffic was generally good to us, including the trucks so it really wasn’t a problem.  At the suggestion of the Adventure Cycling route maps, we took a detour onto McCloud River Loop, a 6-mile loop that took us off of Hwy 89.  It was quite a pretty diversion through the pines with little traffic.  There were a couple of turn-offs to falls but we kept to the road, knowing we had Burney Falls to satisfy our water cravings today.

We saw on our map that there was supposedly food in a little berg called Bartle but weren’t sure if that was going to turn out to be anything, given there was very little out there other than trees.  Well, we got quite the surprise, as there was a little restaurant in Bartle, right on the highway, where we got some delicious pancakes and eggs for our second breakfast.  The woman serving was waitress, cook, dishwasher – everything really.  She owns the place, and has been there for almost 30 years!  That little restaurant seemed to be the only thing that made up Bartle – we did not see anything else.  She was very friendly and filled our water bottles with nice cold water before we left.

Dave and his pancakes

From there we had about 10 miles of the relatively narrow highway until we left Siskyou County and entered Shasta County.  Well, it’s pretty clear that Shasta County has a bit more money to spend on roads, as the road was in much better shape with a nice decent shoulder.  It made for a nice change, not having to watch the traffic behind us and in front of us with such intensity.

Us at another Deadhorse Summit

Again following the Adventure Cycling route, we took a side road that would lead us off Hwy 89 and supposedly to our intended destination, the Burney Falls State Park, through the ‘back’ way.  It was an interesting ride, with a few climbs through some very dry country.  We wound our way down to Lake Britton, which was formed by a dam on the Pit River.  After crossing the dam, we worked our way back uphill, expecting to come to the entry to the state park at any moment.  Well, we rode and we rode and we rode – we did see what appeared to be a parking area, but nothing formal like you would expect for an entrance to a state park, and then suddenly we ended back at the intersection with Hwy 89.  It didn’t make any sense to us, but thankfully there was a woman out in her yard nearby so we stopped to see if she could help a couple of lost cyclists.

Well, it turns out the entrance is on Hwy 89, so our nice diversion onto Clark Creek Road was not necessary and we had to go back up Hwy 89 a mile to get to the park entrance.  This misdirection can in no part be directed to our virtual tour guide Pete – it’s actually a problem with the Adventure Cycling map not accurately reflecting where things are.  Oh well, it gave us a bit more mileage for the day.

We got checked in to the spot Pete booked before he and Inge had to pull out, and stopped at the grocery store for a couple of snacks (soft service ice cream !) before making our way down to the campsite.  It’s a big park (over 100 sites) and is reasonably filled with families so lots of activities going on.  The tent spot is nice – we have our own food locker, water is close by and it is very dry so I expect we will not have any condensation on the tent in the morning.  We ate our PB&J sandwiches to tide us over to dinner – made on the delicious Dave’s Killer Bread Million Dollar Buns, the perfect small bun to make nice sandwiches, and they don’t smash much in the panniers!  Okay, full disclosure, my sister works there but still they are really great buns! 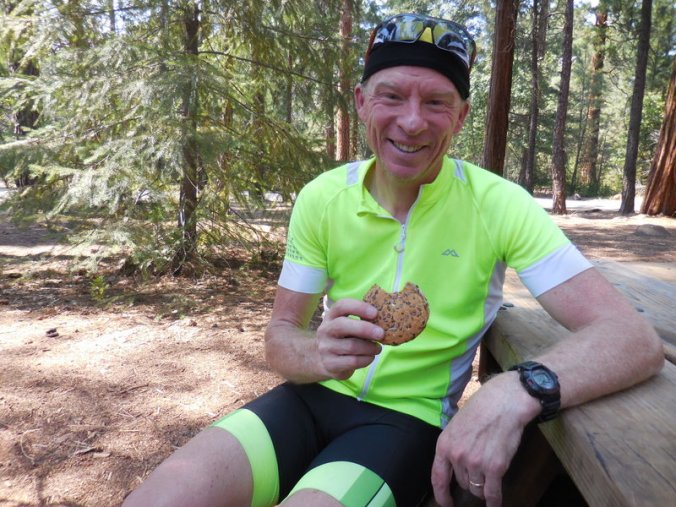 After setting up the tent and getting cleaned up, we walked down to see the infamous Burney Falls.  And wow what a sight it is!  It is really quite beautiful, water cascading over the top and also coming through the rock in various places.  You can really feel the temperature drop as you make your way down to the water – it felt very refreshing compared to the heat up at the campsite.  The information placards note that the Park Service recommends against swimming in the water, due to the temperature is 48F and there is a fast moving current.  Notwithstanding the warnings, of course there were some people there dipping in and out – though mostly out, I expect because of the temperature.  I would have like to put my feet in just to feel it, but it was a rocky climb down to the water so we stayed on the path. 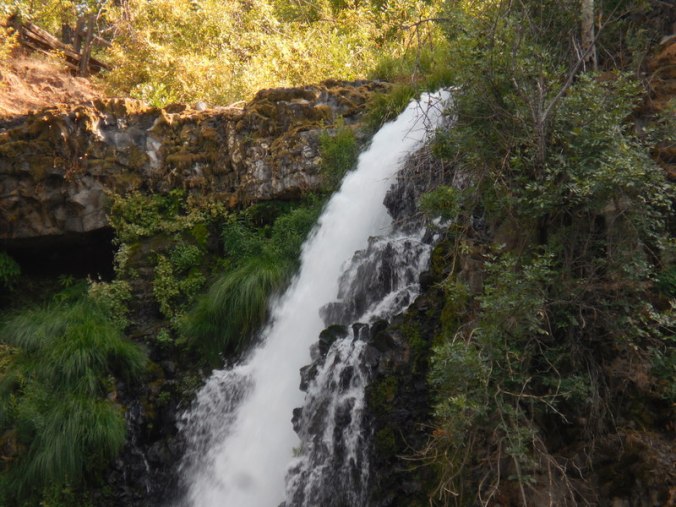 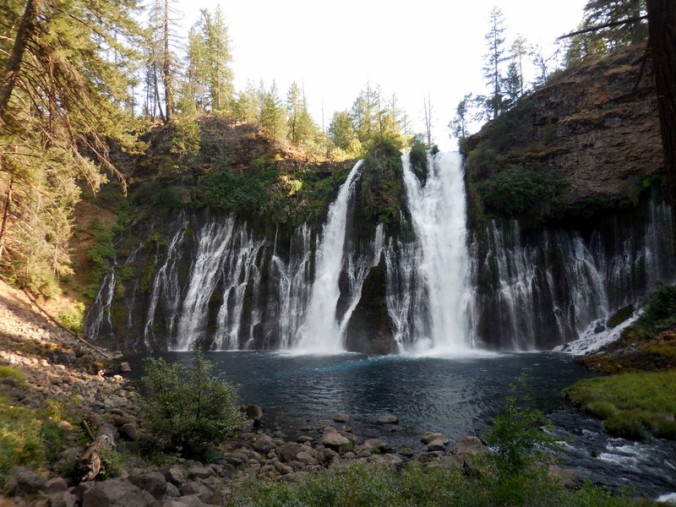 We have eaten our dinner now (instant Indian, not near as good as my dear friend Prajakti’s but it will do for now) and Dave is going to go try to post this up at the visitor center where there is some semblance of Wi-Fi.  If he’s not successful, we’ll have to post sometime tomorrow, as we have no mobile coverage here.  Oh yeah, no coverage but good beer – we picked up a couple Sierra Nevada IPAs at the park grocery store – what else is one to do in the middle of the Sierras?

Tea bag thought of the day…

Tomorrow we head to Lassen National Park, camping at Manzanita Lake.  This will put us about halfway up Lassen Summit – so we have a bit of climbing to do.