Another great stay last night at the Elk Haven RV Park – Dave is batting 1000 on the places he picked for overnight stays on this leg so far.  We had a nice grassy spot with a picnic table, it was pretty quiet even though we were right on Hwy 138, and the toilet block was a fancy log cabin – couldn’t ask for more.  Oh, and there were fresh blackberries right off the vine to add to our oatmeal this morning.

We were aiming for an early start today, as this was the day we had to part company with our riding mates and we all had long days planned to get our next stops.  We left camp at 8am with the temps at a nice, cool, 75F.  We rode together along the North Umpqua River for 20 miles – an exceptionally beautiful ride.  It was only slightly uphill – barely noticeable – and we stopped several times to enjoy the views of the river and the mountains around us.  We stopped at the Steamboat Inn for our farewell second breakfast. 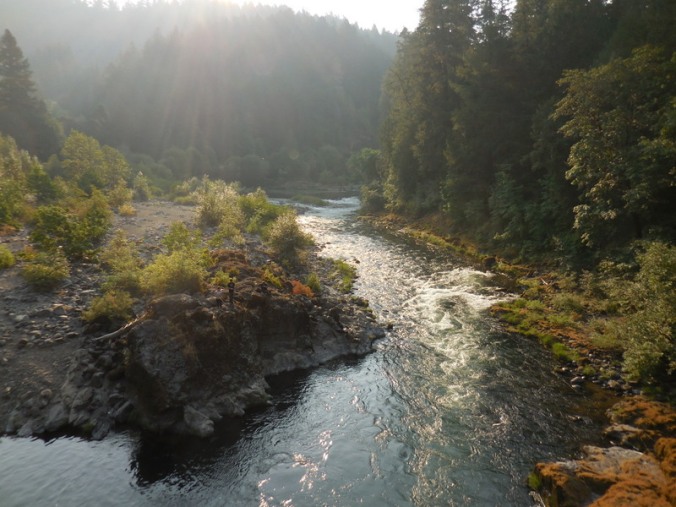 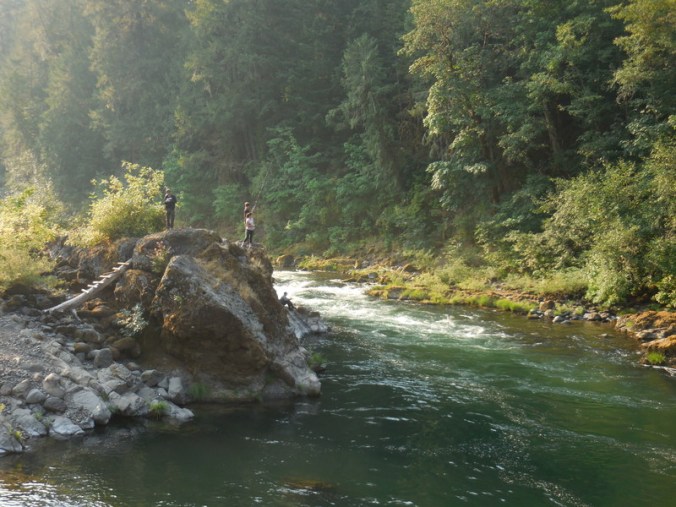 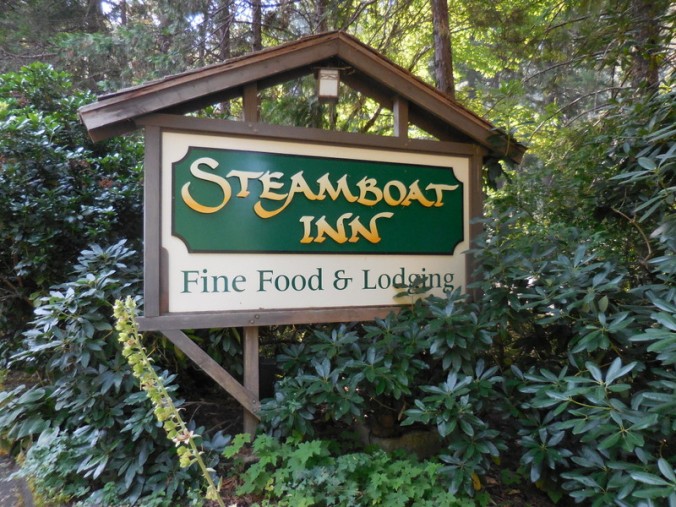 From Steamboat Andy and Anna had about 48 miles to go, much on BLM roads, with a significant climb and then a downhill into Dorena Lake.  We had about 43 miles, continuing along Hwy 138 and the river to get to Diamond Lake.  After some farewell hugs we waved goodbye to them as they headed north.  It was really fun to have them along for a couple of days and we would have loved to have them ride with us longer but they both needed to get back to their ‘normal’ lives.  They will have a couple of days to ride together back to Corvallis so aren’t done cycling yet.

We started climbing as soon as we left Steamboat and basically climbed the remaining 43 miles.  It was pretty unrelenting, and it was pretty uncomfortable in the sun as the temperature was up to the high 90s.  It was pretty scenic – both Dave and I think it is probably the most scenic ride we have had so far on this trip.  If only it hadn’t been all uphill! 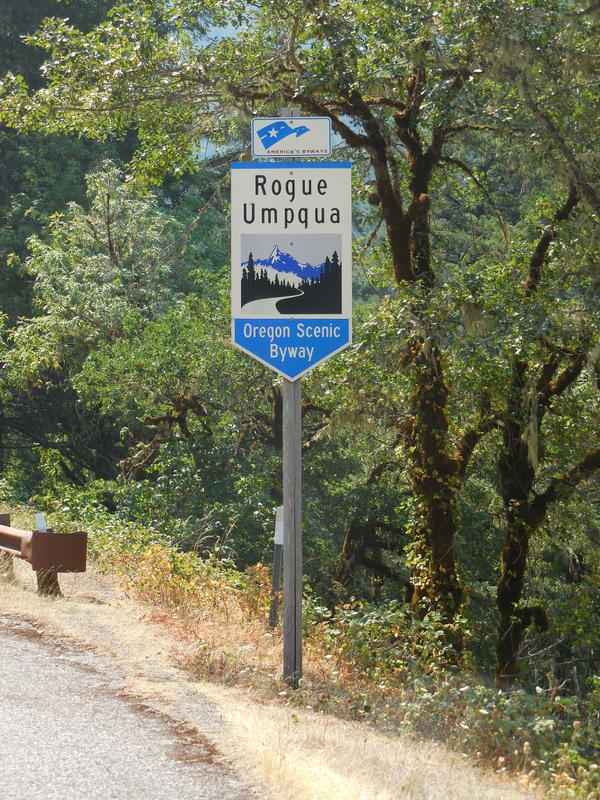 We stopped at a little lake (Stump Lake) to try to cool down with our wet towels, which helped for a bit – at least until we had to get back on the road and continued uphill.  We eventually went through all of our water, including the extra litre we were carrying.  Drinking warm water is not really something you want to do on a hot day, but we didn’t have any other option – there were no stores or cafes to stop for a cool drink along the way. 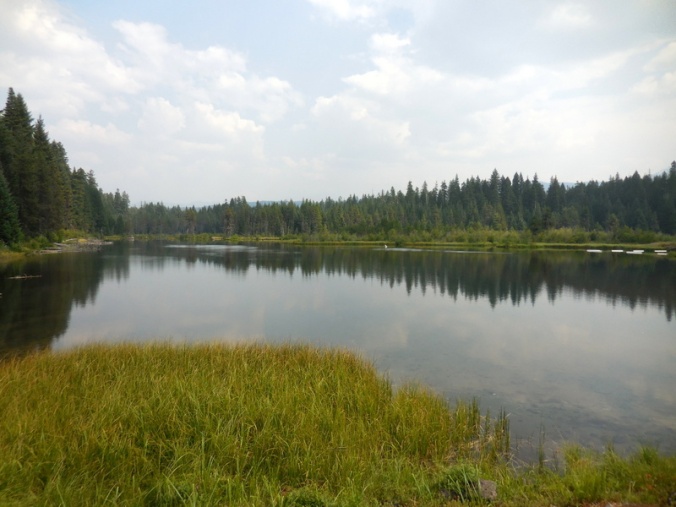 We finally stopped at Clearwater Falls campground to check it out and see what they had for water.  There were no water taps but we could get to the river from the falls so ended up filling our Nalgene bottles and using our Steripen to get some more water.  It was nice and cold and tasted great, so we both drank our fill and made sure all of our bottles were full before leaving to tackle the last 11 miles or so to Diamond Lake.

And yes, those last 11 miles were uphill…  The one saving grace was that the temperature was getting cooler.  Unfortunately that was coupled with the sound of thunder clapping behind us, and soon we came upon some pretty wet roads.  We were both so tired but the sound of that thunder spurred us on to get to the turnoff to Diamond Lake.  From the turnoff it was a slight downhill to the lake and we both actually got a bit chilly – so strange to feel the cold air after all of the hot weather recently.

Given the thunder and lightning (and the fact that it was already 5:30 when we finally rolled in) we decided to see if the lodge here had any rooms before we headed to a campground.  And yeah, they did have a little studio available so we grabbed it – we rolled the bikes right into the room even though they also allocated us a parking place (huh?).  It is a bit like out of the 50’s, but it is nice to be inside and gosh did that shower feel nice!  It has a little kitchenette so we just cooked our dinner here and are now getting close to the point of collapse (well, at least I am).

We had a total of 5100 feet of climbing today, mostly without a break  – ouch, I am not sure my knees can handle that anymore.  We heard from Andy and they made it, arriving at Dorena Lake around the same time we did here.  They also had a big day – turns out it was 68 miles with 3150 feet of climbing.  Well done guys!  Hopefully they will have a couple of easier days back to Corvallis and Anna will live to ride many more tours.

Tomorrow we head down toward Crater Lake and will meet my mom and sister at Union Creek Lodge.  We had been thinking about riding around the West Rim of Crater Lake on the way there, but as of the last alert on the Crater Lake Park site the portion of West Rim we need to get through is closed due to wildfires in the area.  So, we’ll see in the morning but it may be an easy day to the next lodge tomorrow (not that I would be complaining…)

Dave is going to go to the lodge to post this so if he edits the text and introduces any errors don’t blame me – I will have to fix them in the morning!  (Junior Editors note: the internet is “full” in the lodge and it shuts off at 9:30 – so I’ll post this in the morning – and no, I didn’t change anything!  Second update: net too slow for photo captions…)