Watching TV at brekkie the other day, the weather person reminded us that the ride was this weekend.  The 200 mile STP is covered in either two days or one, and the one day riders used to ride on Sunday.  Both two and one days riders would normally finish on Sunday.  Well, that was the old days – now it seems that they let some of the one day riders complete their full ride on the Saturday (it was Saturday yesterday, the day I’m writing about here).

So, that meant as we rode we were passed by small groups of “gun” riders, on lightweight carbon bikes, all going very fast.  Every time I saw a group coming up behind us, I accelerated to make it harder for them to pass.  It was quite fun to “make them suffer” and given that our bikes weigh closer to 120 pounds, most of them were full of praise as they finally rolled past us.  My senior editor vacillated between laughing and yelling at me – the later clearly because I was making her work too hard for a bicycle tour.

Of course, we did not ride STP, in two days or one.  We did however, ride our bikes to Portland all the way from Fairbanks.  Between gasps and hard pushes to make the big boys work, we figured out that we were riding FTP – thus the title of today’s post.  We ended riding 90 miles, pretty fast and were happy to see the real STP riders pull off our route, about 20k from Nancy Mum’s house.

But I’m getting ahead of myself here.  Even before we joined up with the STP route, we were having a great day out on the bikes.  It started way back at camp in Skamokawa where we found the onsite espresso stand was indeed open on weekend mornings.  We were quite happy to forgo our normal aero-press coffee for a fresh espresso.  Sorry Chris – this meant that we didn’t quite finish the coffee you bought for us all the way back in Tok, Alaska.

Skamokawa is an interesting town.  We read that yesterday that the area used to have 50 salmon canneries.  They started popping up in the 1860s, reaching their peak in early 1900s.  The fishery was affected greatly by the building of upstream dams and over fishing.  Today, there are no canneries and fairly limited salmon runs.  Living in Australia the last few years, we’ve read a lot about the Indonesian and Philippines overfishing or doing bad things like fishing with dynamite – it would seem that the moral high ground of fishery management is not a place where we have much right to stand.

Leaving camp, we had all of 10 miles to ride to reach the town of Cathlamet where they were having their annual street fair, parade and market day.  On the way to town we spotted an amazing osprey nest on top of a bridge.  The osprey was completely nonplussed by cars and trucks zooming past.  It was not overly thrilled that we were there on foot or bike but I managed to get a few photos before it took flight.

Osprey nest on the bridge near Skamokawa

We were too early in Cathlamet for the parade but the market was just getting started, so we stopped for a coffee and cinnamon bun.  We were headed for the Puget Island ferry which ran on the hour and we were early, so we hung out with the locals in the morning sun and watched the fun run start and finish.  It’s a small town, the fun run top three were all from the same family – with grandpa sitting with us chatting – he was quite proud. 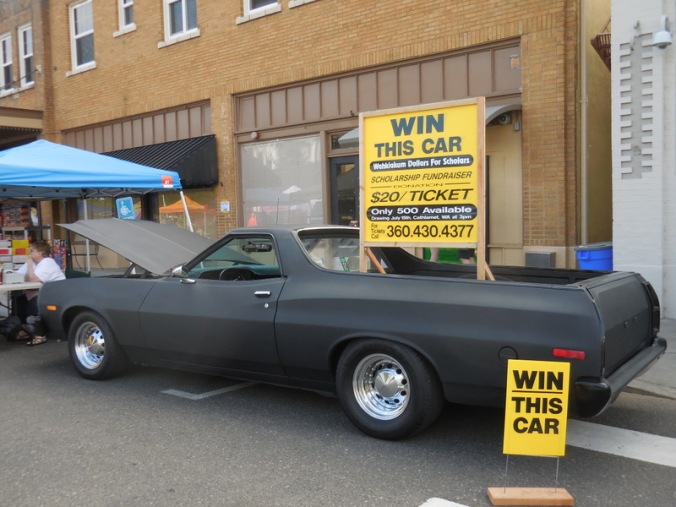 We had plenty of time to make the 3 miles to the 10AM ferry if we rode normal speed.  Of course, Puget Island is quite scenic and I took too many photos.  At one point our senior editor gave me the firm “we’re going to miss the ferry if you keep stopping” speech, so we time trialled the last mile at top speed – made the ferry with 5 minutes to spare – could have taken one more photo for sure.

Getting warm on the ferry, time to take off the leg warmers 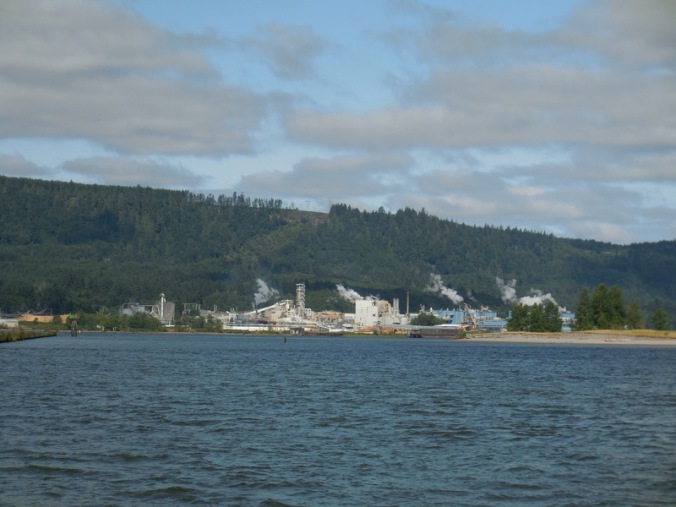 On the ferry, we crossed from Washington to Oregon – so I’m back on the roadside license plate search again – looking for an Oregon souvenir.  Once across the ferry, we found ourselves on Highway 30 heading inland.  We had a nice tailwind and made good time to Clatskanie where there was another Saturday market in progress.  We made the rounds and pondered our next move.  We had planned on going over Highway 47 to Mist, but that was a big climb and the tailwinds were nice.  Staying out on Highway 30 was our second option.  Faced with a choice, we did what we almost always do, settled into the local diner for a second brekkie (the cinnamon roll didn’t count as a brekkie because we split it – that’s my story and I’m sticking to it).

After a good feed (I’m happy to report that Nancy did NOT have pancakes today) we decided that we’d take advantage of the winds and make a big push for Portland.  I was a little reluctant to do this because I thought we’d miss the fun of riding with some of the STP riders on Sunday – at that point, I did not know about the new Saturday one day riding option.

Nancy eating something other than pancakes – biscuits and gravy

Stuffed from eating, we headed back onto Highway 30 and were immediately greeted by a 750 foot hill – so much for avoiding the Highway 47 climb.  It’s not much fun riding on full stomachs but we knew we’d have flat roads once we got passed the Longview, WA bridge (across from Rainer, OR on the Columbia River).  Not yet in “racer” mode, we stopped on the hill riding into Rainer – the view of the bridge and Mt St Helens was quite nice.

As we zoomed down the hill, traffic from bridge merged with us.  It was here that we spotted our first one day STP riders.  We weren’t really sure that they were STP riders until we saw that a few of them had numbers pinned to their jerseys.  We still had another 55 miles to ride but it was “game on” pretty soon thereafter.

We rode with the wind and STP riders for the next hour or so, before stopping in St Helens for a quick afternoon tea – nothing fancy, mind you, just a servo, iced tea and a cookie.  We were tempted to stop at one of the official STP rest stops and use our “story” to get a free refuel but decided that since we didn’t pay for it, we’d be better just going our own.

Afternoon tea stop – check out the size of that can of ice tea!

I don’t think too many of the STP one day riders finish the ride on Saturday as there was not too many groups – just enough to keep us moving but not the 10,000 riders we might have had if we’ve joined the route on Sunday.  We got some cheers from car drivers, a policeman in his car, a few of the rest stop workers and of course, all of the bunches that passed us.  We didn’t really have time to tell any of them that we were riding FTP, not STP.  But it didn’t really matter, it was just fun being out there with them. 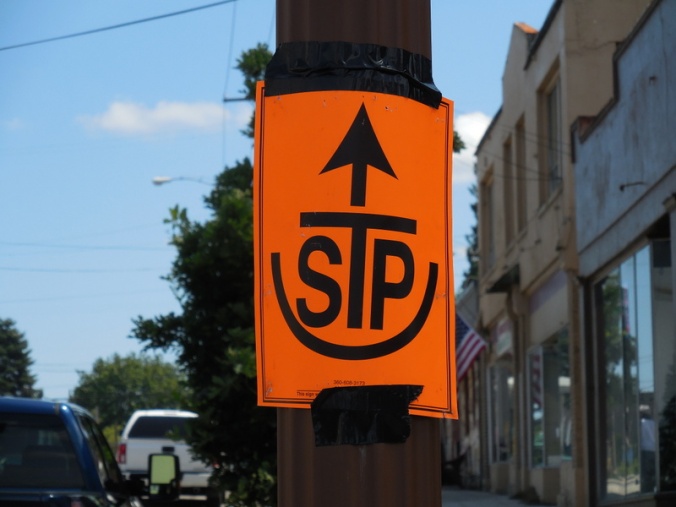 Nancy (and truthfully I) were happy to reach the St Johns bridge where the STP route crosses the Columbia so that the riders can finish at Lloyd Centre in Portland.  We still had another 15 miles to ride but now we could dial it back to our normal touring pace.  We rolled into Northwest Portland, taking a break at Coffee People for a Velvet Hammer – an iced coffee treat that we used to have occasionally when we lived in Portland.  This was followed by a leisurely ride through the city, up Terwilliger Boulevard to Jan’s house (Nancy’s Mum) in Multnomah Village.

Getting the last of the Velvet Hammer to get us home

View of Mt Hood from Terwilliger

While we had a great day, we did finish on a sort of not so funny moment.  When we were about 2k from Jan’s house a group of kids drove past us chucking an egg at each of us.  They missed me, but hit the back of Nancy’s front fender.  Egg kind of splattered everywhere but Nancy maintained control of her bike.  I say that this was sort of funny because, really, we’d had such a great day and were so excited to have ridden FTP, we were not going to let a few juvenile delinquents spoil the mood.  A quick wash with the hose at Jan’s was all that was needed to erase the whole event from our minds. 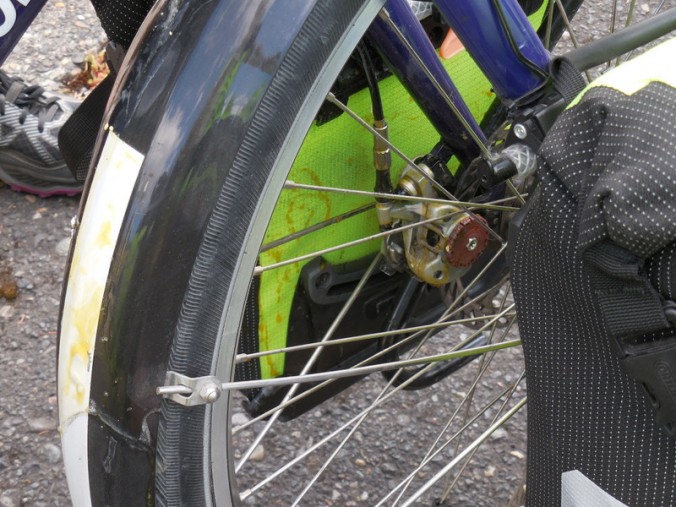 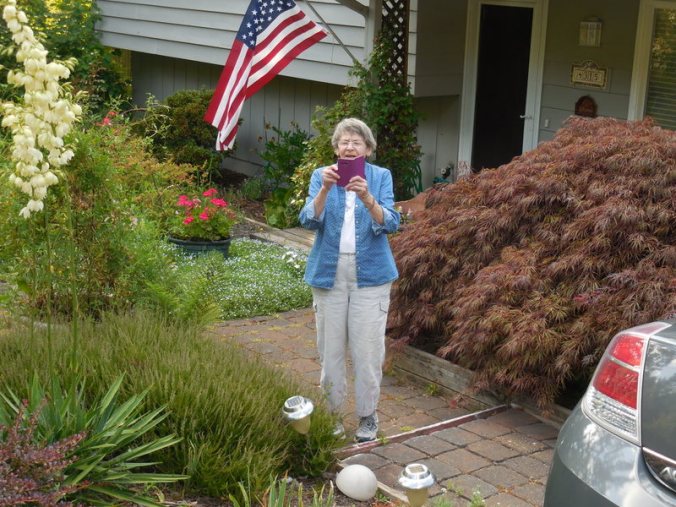 End of the Fairbanks to Portland leg

We’ll be in Portland, off the bikes mostly, for a couple weeks.  We’ll be giving everything a good clean, replacing a few bits of equipment, resupplying food stores and generally fattening/resting up.  People always ask if lose weight on these trips and we generally do on these longer trips.  So far on this trip I lost something like 8 pounds.  I know where I lost it – out on the Cassiar Highway when food was just not that plentiful.  Being a gentleman, I won’t be discussing Nancy’s weight loss here – suffice it to say, we are both fitter now than when we started in Fairbanks.

Weigh-in – scale not quite as accurate as Alaska’s, as only goes by 50lb increments

We tentatively leave Portland on August 3rd but that is not 100% firmed up.  We will have a couple riding partners the next leg of the trip – more on them to follow in a later post.  We’ll also try getting a few “7 week, FTP summary” posts.  We’ve got a couple lists of the best things that we look forward to sharing.