Quiet night in the campground last night, other than a couple of very strange sounding birds and the motorcycle that came into the hiker/biker site sometime after midnight.  This morning the motorcycle was in front of the tent that was there when we got there yesterday and the fellow surfaced as we were packing up and hopped on his motorbike and rode off.  Not sure how that qualifies in the ‘no motor vehicles’ hiker/biker section but oh well.

Surprisingly we had a few spits of rain last night – we have gotten complacent about checking the weather forecast so weren’t sure what we were in for today.  This morning it was relatively dry though, so I don’t think it really rained much.  The mosquitoes were thick while we were getting things organised so we made a quick decision to try to find a cafe somewhere along the way for breakfast rather than try to eat oatmeal while slapping away at the mozzies.  It wasn’t too long before we came across The Mutineer Cafe, which was just opening up as we rode up.

We had a tasty breakfast, pancakes for me (of course) and Dave had the pork and eggs.  Dave went out to get something from the bikes and spent a few minutes talking to a lady who had just driven up and commented on our bikes.  She was just stopping by to get a cup of coffee to go, and came over to talk to us for a minute.  We are pretty sure her name was Sharon, and she was keen to tell us that she thought what we were doing was great and to live life to the fullest.  Then, it turned out when we went to pay our bill that she had bought our breakfast!  She didn’t say anything to us when we were chatting and so we didn’t get to say thank you even, but if you are reading this Sharon thanks very much for your lovely gift!

The day’s riding was relatively easy.  The traffic on SR 105 is pretty light and there is a nice shoulder – we did have a bit of roadwork to get through, but it wasn’t too bad.  We had a little bit of riding along the ocean but then we headed inland along Willapa Bay.  Lots of oyster farming in the bay, and we saw some folks out working on the beds.  We reached the small town of Raymond about 11:30, and stopped at a bank to get more cash and then at a grocery store to get food for the next couple of days.  We grabbed a tub of yogurt and a big container of Oregon blueberries and ate that sitting on a bench in front of the Thriftway store. 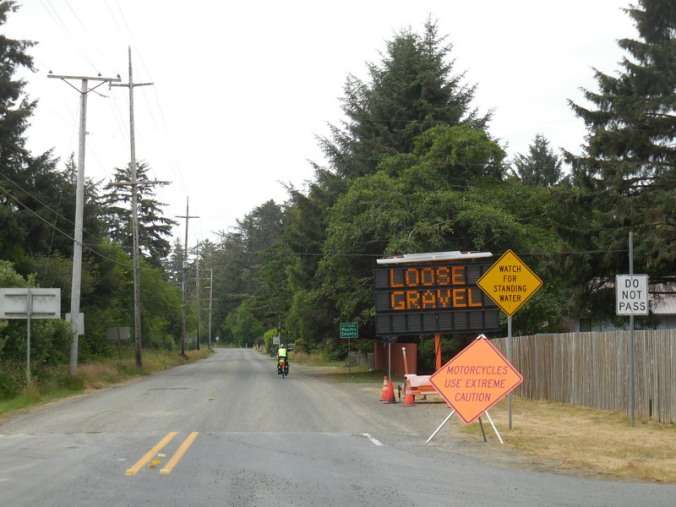 Turned out to be “not too bad”

Raymond is basically at the end of the bay, where SR 105 ends back at Hwy 101.  From there we followed 101 down the other side of the bay – we could see the road across the bay that we had come in on.  Too bad they don’t have a little ferry service to take you right across!  Actually, the tide was out so far the bay was mostly mud flats when we went by so a boat wouldn’t have been too useful.  We did find a nice bike path from the grocery store that kept us off 101 for a bit.  Unfortunately it petered out just as we hit a roadworks section where they were paving, but we had a good shoulder and made it out to the flagger before the cars came up behind us. 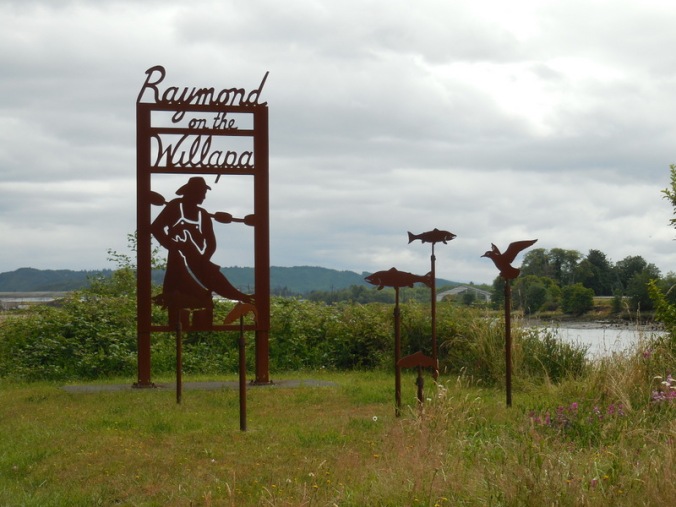 Raymond had hundreds of these metal carvings

The place we had picked out to stay, Bay Center, is up on a little spit that forms one of the boundaries for the bay so we had to turn off of 101 to get here.  Not surprisingly there were several oyster and fresh seafood businesses along the way, so we stopped at one of them to see what they had to offer.  I am not a big oyster fan but Dave likes them.  They only sell them in quantities too large for him to eat, so he had to satisfy himself with an oyster shooter (one oyster in some cocktail sauce) to take to camp with us. 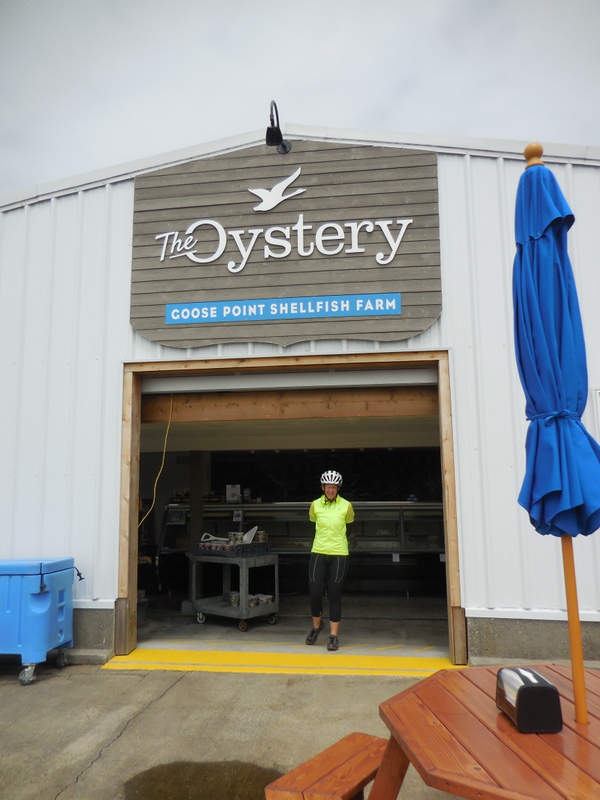 We can’t eat take many 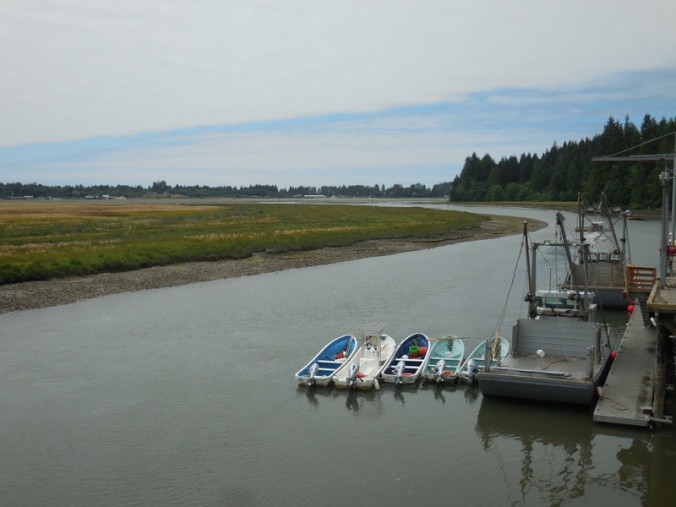 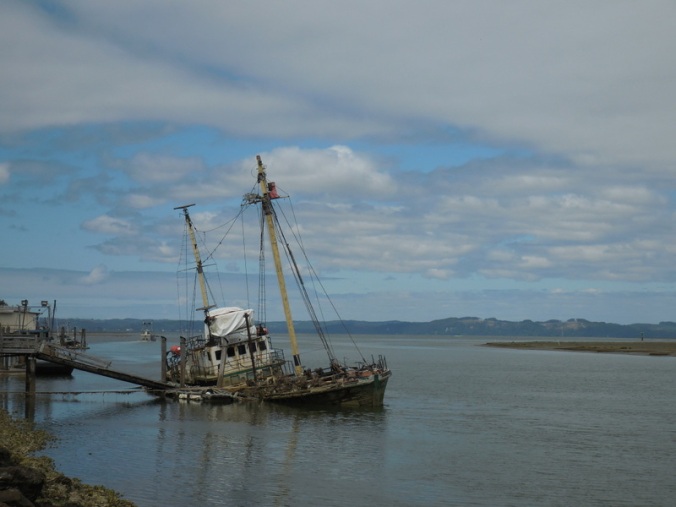 For sale, needs work and a captain

We ended up at the KOA campground in Bay Center.  It is a decent place, but like all KOAs it is fairly rule-driven.  Our spot is okay, and they have nice showers and laundry facilities so that is what we needed.  The Wi-Fi is free but is not too great so we’ll see if we can get this blog loaded. 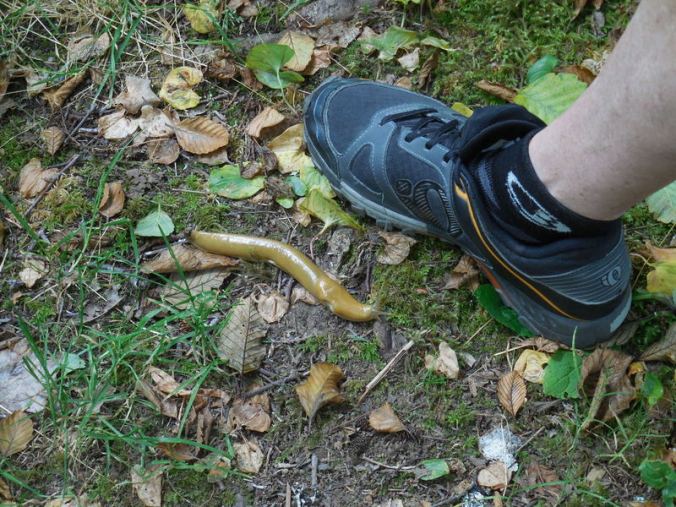 Tomorrow is a shorter day to Skamokawa, a spot that will put us close to a ferry to take us across to Oregon.  Then only a couple more days riding until we reach Portland and some time off to spend with family.  Hopefully the sunshine will hold until we get there!