We were up early and nearly first in the camp kitchen using the stove and kettle – I could get used to such creature comforts.  The only problem with the kitchen was the guy in there watching FOX news – we’ve been enjoying our mostly news free mornings, Trump-news free that is.

Today we could have ridden Highway 101 or Highway 112 on the Olympic Peninsula.  We chose to ride Highway 101.  Both roads are busy with logging truck and other traffic.  They are narrow at times, don’t have a lot of extra room and most of the day are full of log trucks.  Cyclists use the roads as well so where it wasn’t possible to make the road safer, bicyclists get warning signs telling us to be careful, quite a few of them in fact.  Today I counted 4 signs and a 5th that was missing but noted by another sign saying that a warning sign was coming.  You can’t possibly read these signs without stopping.  I snapped a few photos of them for you to read here.  Most of the sign info is completely obvious but someone in the highway department is probably feeling better by putting the signs up.

To address the issue of trucks and bikes not working perfectly together, they are trying to build a bicycle only route – all the way from Port Townsend to Forks – the Olympic Discovery Trail (ODT).  We had toyed with riding the finished parts out of Port Angeles but heard that it was closed for repairs in a few places so we stuck to Highway 101.  At Lake Crescent, where the bike road is also closed, we had to ride 101.  Here they’ve put in a flashing light system that makes a set of lights flash for 1 hour from the moment that you push a button.  You have 1 hour to ride 12 miles, or at least 1 hour before the lights stop flashing.  In theory, the trucks see the lights and slow down.  The only trouble is that the road is very scenic and it would be fun to take some photos.  Not today, my senior editor was moving like the wind, trying to beat the 1 hour deadline.  For the record, in spite of a very strong headwind (white caps on the lake even) we beat it by 12 minutes, even with one stop for pictures – I didn’t want to push my luck.

Lake Crescent in the morning 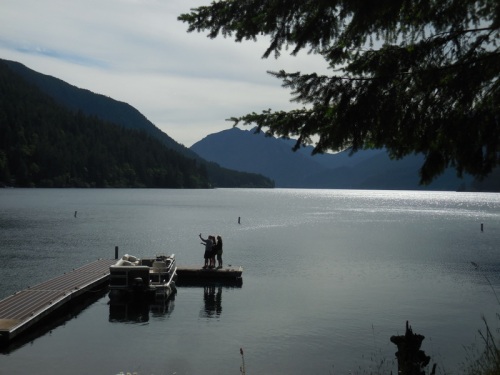 We stopped at the end of the lake at Fairholme store for a rest and to let our nerves settle.  They had nothing but packaged junk food but we managed to find a couple of OK sweet rolls and an iced tea.  It was nice sitting out on the sun porch and just enjoying the morning.  From Fairholme there is a 4k climb but here the road was much wider, complete with 2 lanes and a shoulder for the uphill traffic.

At the top of the climb it was supposed to be downhill nearly all the way to Forks – or at least that’s what Google maps said.  Even with a wide shoulder and downhills forecast, I couldn’t help myself and when the chance came to hop on the ODT and have some quiet riding we took it.  We rode the trail for about 10 miles and it was super quiet.  It was a nice new asphalt trail through the forest.  There were a couple turns and one log truck encounter but generally, it was a nice trail and enjoyable part of the day.  Two shots of the trail follow.

We left the trail when we reached the first major crossroad.  Nancy felt like she was getting cheated out of her downhill and really at this point, 101 was perfectly safe with a nice wide shoulder.  We ran into a younger couple here who were riding from Seattle to San Francisco.  They had ridden the closed trail for the last day and from what they described, we were pretty happy with our choice riding 101.

Back out on 101, we had some downhill, which was nice but we also had some headwinds – the later was not a surprise as we were heading straight out to the coast at this point.  That’s just the way the wind blows when you have nice weather in these parts.  Before long we came upon a cafe/roadhouse called the Hungry Bear Cafe.  It was nearly lunch time so we decided to stop.  They stopped serving brekkie just before we arrived so we were forced to share a sandwich – a Hungry Bear.  It was way too big even with only half each.  We both regretted eating so much for the next 15k of riding.

We eventually made it to Forks where we saw the Seattle/SFO couple again.  Somehow we missed their names and a photo.  We’ll keep an eye out for them over the next few days.  A quick stop at Thriftway for groceries and a snack were followed by a stop at the information centre for directions and quick tour of the logging memorials.  Forks is logging country for sure.  We are certainly not anti-logging.  In fact, we like living in wooden houses and using paper products.  We only wish that some of the roads were wider so that the loggers and the bicycles could share the road better.

Forest, not Park – they can cut trees here

Memorial to the loggers

We rode the last 10k to Bogachiel State Park and our first hiker biker site.  The park is nice, pretty quiet in terms of people and we only had to pay $12 for the site.  If we’d had a car, the site next door, which is exactly the same and has no additional services, costs $25.  I think that they are trying to encourage hiker/bikers – we don’t mind whatever the motivation.  The only downside is that we have had some visitors – a lovely slug (the big Pacific NW banana slug kind) found a resting spot on my back rack, and a chipmunk ran through the site while we were eating dinner.  So, the senior editor is insisting that all bags are completely sealed tonight.

I whipped up a pretty tasty dinner of fried pork, sweet potatoes, scallions and garlic.  We had it with some noodles that we’ve been carrying since Dease Lake.  The noodles were pretty average but the stir fry was a winner.  We are doing pretty well on our quest to not have pasta with red sauce every night.  We should have picked up a salad at the store but we had more than enough food anyway.

Too much hot mustard Nancy~

Tomorrow we are headed for Lake Quinault and another state park.  There is a “big” spruce tree and a rain forest there as well.  I’m not sure we’ll make to either of them as they are further into the forest than the park.  Either way, Lake Quinault is supposed to be nice so it should be a good day.  Even better, we’ll be heading in a more friendly direction wind wise, so the ride should be easier than today.  Temperatures are a bit cooler than we had on Vancouver Island, but at least that reduces the need for sunscreen.

This entry was posted in Americas trip, Uncategorized, Washington. Bookmark the permalink.