Day two completed.  No issues or dramas.  The first night in the tents went well.  Chris is a big time snorer and according to Mark, so am I.  It seems that Mark was up at midnight and he noted that the volume from our tent was actually higher than Chris’s tent.  If I were not such a gentleman, I’d blame it on Nancy – wait, maybe it was her.  (Editor’s note – no it wasn’t.  Dave is a snorer.)

Getting up and rolling this morning was a typical first day breaking camp.  Nothing ever seems to fit back into bags as well second time around.  Plus we got a lesson from Chris on the best way to use an Aeropress coffee maker.  Chris is quite committed to his coffee, bringing his own roasted beans.  Who knew that we weren’t using the Aeropress to its maximum potential – all we were doing was following the instruction booklet but Chris had discovered a better way through the wonders of YouTube!

We had quite a bit of up and down for the first 30 miles.  We were basically riding up the Tanana River, but the road didn’t follow the shoreline – so it wasn’t the typical 1-2% up-river grade.  We had to ride up and over a number of “headlands”.  However, the fantastic tailwind we had all day made the downhills quite fun.  We had a couple 5k downhills where we were riding more than 40kph for the entire time, without peddling. 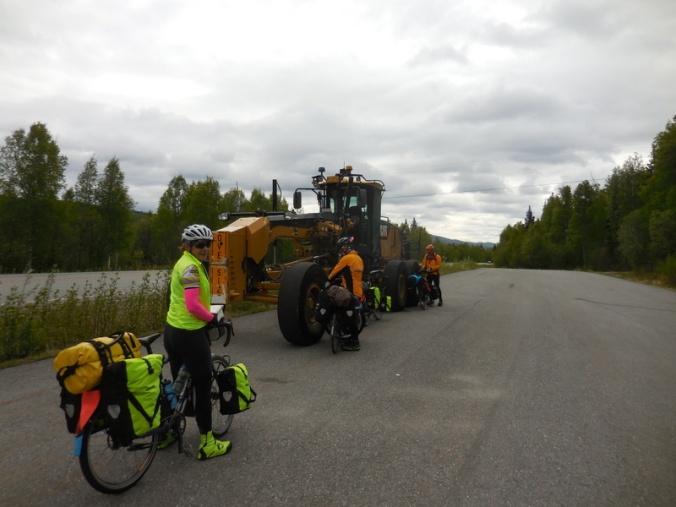 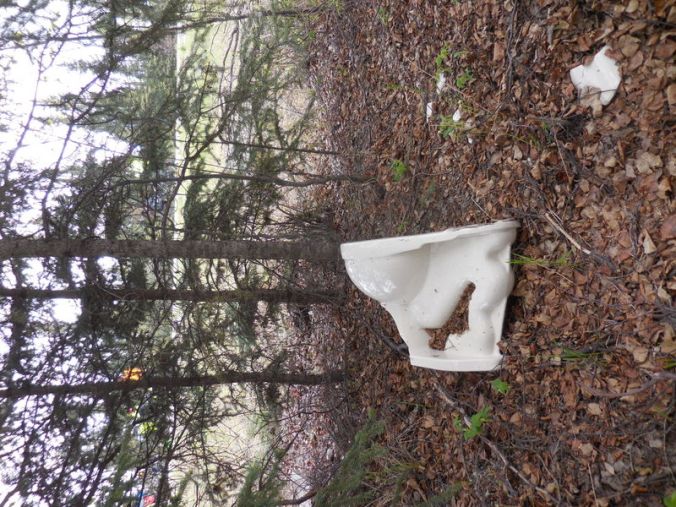 Roadside toilet – our standards are dropping

We took stops at a number of viewpoints overlooking the delta.  It was too cloudy to see the distant ranges but the delta itself was quite scenic.  Even as far as we are from the ocean, the river is very wide – lots of open gavel beds and forks in the river. 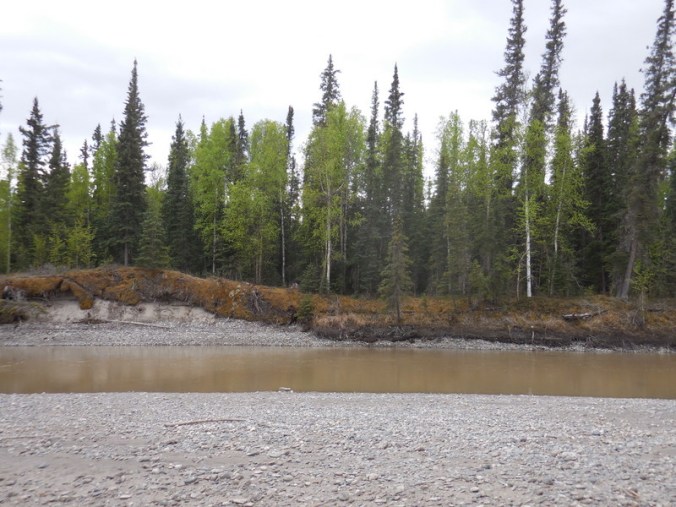 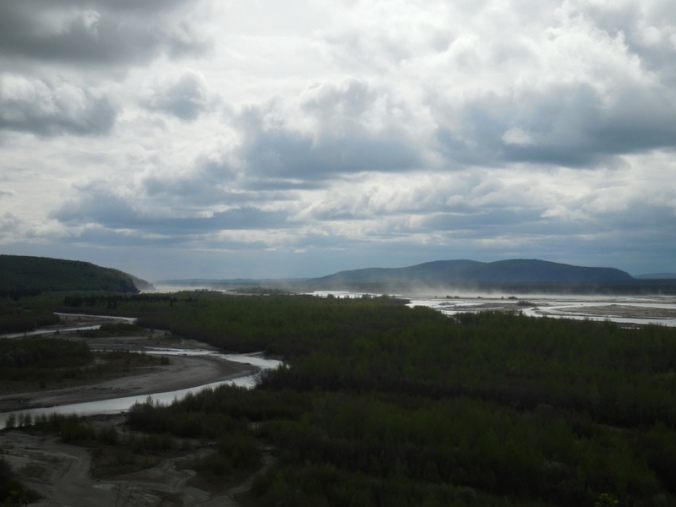 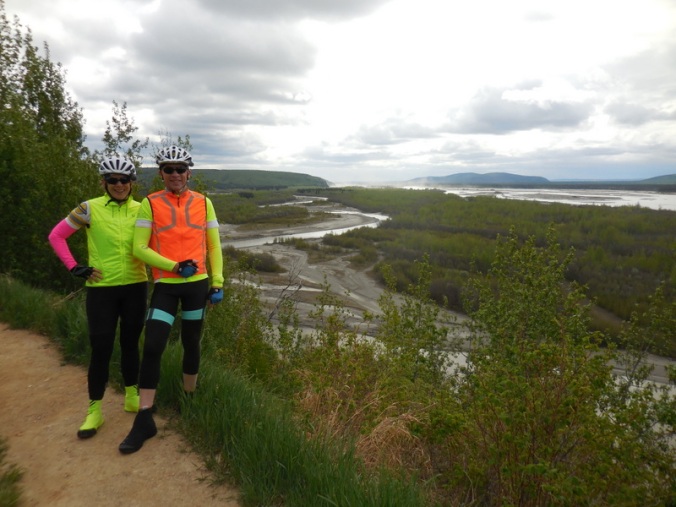 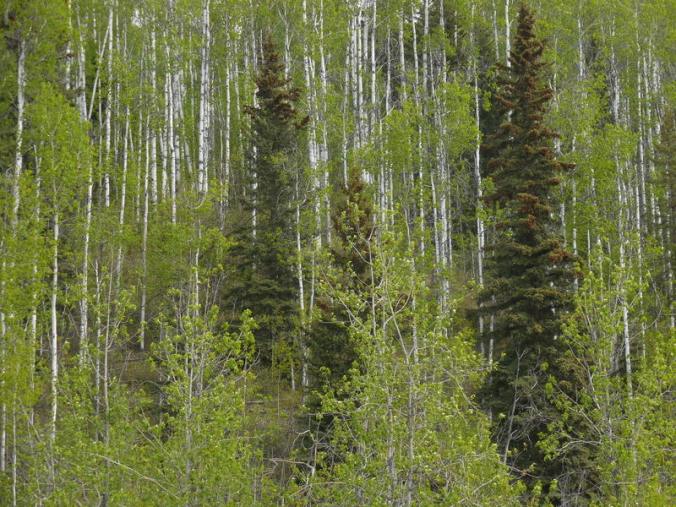 We passed the Alaska Pipeline today as well when we crossed a large bridge over the Tanana River.  The pipeline had a bridge all of its’ own with a funky waterslide curvy pipe to get the oil well above the river.  Later in the day at a stop, we saw a cross-section of the pipe – it is not a big as you’d think for moving 500,000 barrels of oil per day.

We still haven’t seen any big mammals – but we’re ok with that.  I walked a river path last night at the Lazy Moose and spotted some (surprise) moose tracks – see below for scale.  I’m not so sure I want to encounter a moose in real-life our walking along a river by myself so seeing the tracks were enough for me.

We mostly snacked on the ride, eating bars and making a brief stop to have some BB&J roll ups.  Before we knew it we were in Delta Junction.  This is the start (or end depending on your direction) of the Alcan – so we stopped at visitor centre to get the story.  For the 3rd or 4th time in the last couple days, we were told to eat at the Buffalo Drive-in for their famous buffalo burgers.  We couldn’t resist – even though it being a drive-in, meant that we were going to be sitting in the cool afternoon breeze.  The temperatures have been cool to mild – not bad for riding but a little cool for sitting at a drive-in.  We were all pretty hungry, meaning that before anyone thought to get a burger picture, we’d all pretty much inhaled our meals.  Nancy wasn’t quite sure about the buffalo so stuck with an ‘ordinary’ cheeseburger which she said was very good. 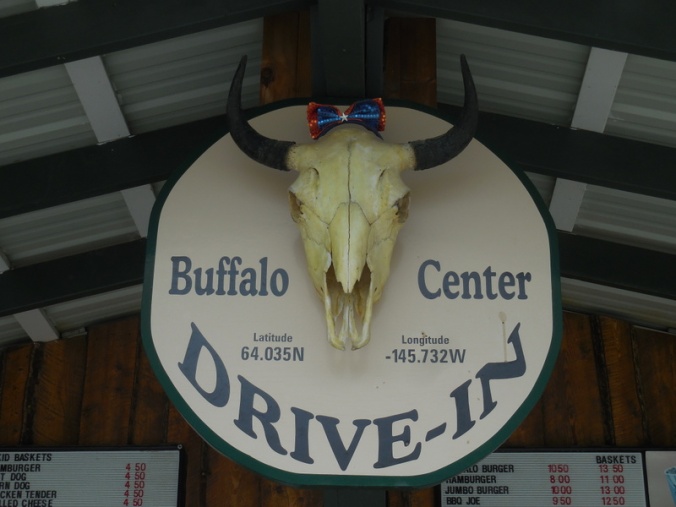 The Alcan was constructed during World War II for the purpose of connecting the lower 48 states to Alaska, cutting across Yukon and BC, Canada. It has a couple starting points down in Canada, but a common ending point here in Delta Junction.  We’ll be on the Alcan for the next 750 miles or so until we reach Watson Lake.

Thankfully after our burgers, we only had about half a mile to ride before we reached our stop at the Snowed-In RV park.  They have nice hot shower and laundry – more than we’ll get tomorrow night so we didn’t mind stopping.  We had a choice of where to pitch the tent and chose to do so in the fenced kiddie play area right by the camp office.  We are pretty sure that the cyclone fence will keep the large animals at bay for the night – no need to hang our food in a tree.  It is an interesting park, filled with lots of transient workers so we will see what the noise level is during the night.

The sun is now shining brightly, at almost 7:30 and tomorrow’s weather looks good for cycling – no rain forecast.  We are headed to a spot half way between here and Tok called Dot Lake.  We don’t think there are any services there or along the way, so tomorrow will be our first ‘wilderness’ day where I get to practice my rope throwing skills to get the food up in the trees…. 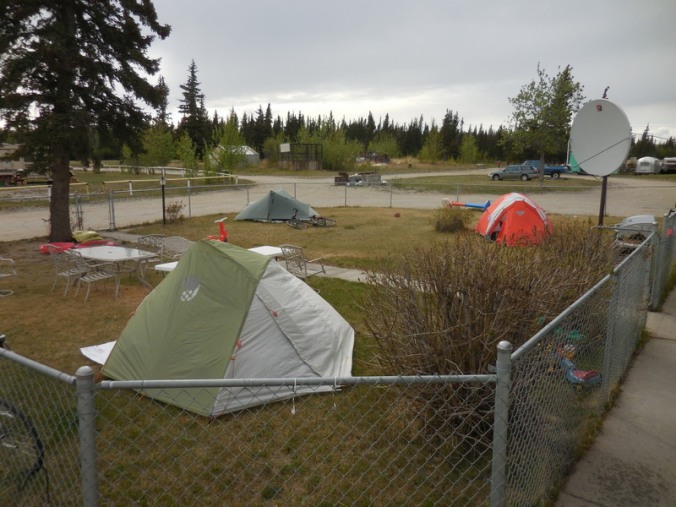 Camp for the night