The photo above is of Steve Smith, the captain of Australia’s cricket team, making an amazing catch in a match against New Zealand this summer.  You’re probably wondering what Steve Smith and cricket have to do with our upcoming bike trip.  The answer is complicated but let me explain.

For the last couple weeks of the 2016, Nancy’s brother (Andy) and his family made a visit to see us here in Sydney.  We planned out a few things to do, including taking the whole mob to a Sydney Sixers Big Bash Cricket game – Big Bash is T20 cricket – sort of “cricket on speed” –  a fun and fast family game that I booked hoping it wouldn’t be too boring and that at least some of our mob would find it entertaining.  I was only half successful – “the girls” left the match at half time.  “The boys” and in particular our nephew, Eli really enjoyed the game.  In fact Eli took quite a shine to cricket in general.

Much to Nancy’s chagrin, cricket is on TV a lot during the Australian summer.  I’ve wasted many a nice day watching test, one-day and T20 cricket on the telly (don’t worry if you don’t know what any of that means – Nancy doesn’t either (Editor’s note – and she doesn’t want to)).  For the next couple weeks, with Eli as my new partner in crime, we set about getting in as much TV cricket as we could.  I got away with watching more than normal as I was only “helping Eli” learn the game – as any good uncle would do.

All this cricket watching made Eli want to try playing cricket himself.  So when a backyard cricket set popped up in the discount bin at the Boxing Day sales we snapped it up.  New Year’s Day we (the whole mob, including the girls) headed over to the local cricket oval to give it go.  Let me start by saying that it is a lot easier to watch pros play cricket than it is actually play it yourself.  I can’t bowl very well so I threw (again here, don’t worry that you can’t follow – throwing vs bowling, we lost Nancy a long time ago (Editor’s note – I do actually understand that, I just choose to spend my time in pursuit of more meaningful goals)).  Eli was our batsman and the rest of the crew sort of scattered around the field in random locations.  Eventually Eli figured out the weird flat cricket bat, not at all like a round American baseball bat, and started making contact.  I won’t bore you with the details of how, but we eventually got him out – several times – and we changed over to his father, Andy, as the batsman.

At some point walking over to the park, I should have looked at my driver’s license and verified that I was indeed 55 years old.  You see, Andy and I have been competing with each other for as long as I can remember – nothing serious, just mucking about at family gatherings or out on a bike ride.  Getting Andy out in cricket was suddenly important to me.  So important that once he too figured out the bat, started making contact and popped a catchable ball in my general direction, I decided that suddenly I was Steve Smith and I would complete an amazing diving one-hander.  For the record, the catch was made and Andy was out.  Unfortunately soon after the catch, I realized that I had violated my agreement with gravity and I came thumping back to the ground, right on my 55 year old shoulder.

Yowza!  Pain shot up and down my arm.  My shoulder screamed out and I couldn’t feel my fingers.  I thought for sure that I broken something, perhaps my collar bone.  Yes, Andy was out, but I was really out.  I retired to the sidelines figuring that my arm would come good with a little break.  The game ended a bit after that and we returned home.  I iced my shoulder, watching more cricket on the telly with Eli (as if I needed another excuse to do nothing!).  Eventually the feeling returned to my hand and I tested the shoulder.  It was painful but I had full mobility.  I figured that an emergency room trip was overkill because something broken would surely not allow full range of motion – yea, good self diagnosis Dr Dave.  As they say in Oz, “you gotta be haaad”.

I moaned and grunted my way through the next week.  Andy, Eli and crew eventually returned to the USA and the arm/shoulder sort of started to feel better but it was slow progress – the swelling went down but there was still a bump on the top of my right collar bone and some particular movements caused a lot of pain.  So a week after “the catch” I decided to give our GP a call just to be sure.  Long time LWOP readers will remember that Nancy fell and broke her collar bone on the eve of the start of our last big trip.  It was not quite the eve of the trip but I feared I may have repeated that little misstep.

I replayed this tragic tale for my GP.  She reminded me again that I am not 27 years old like Steve Smith and examined my shoulder.  Pre x-ray, she thought that I may have chipped the collar bone.  So off to x-rays I went.

Good news – the x-rays revealed nothing broken (make that great news).  The “chip” is just a severe bruise.  I’ve been ruled off the cricket pitch (pretty much forever) and to take it generally easy the next couple weeks.  I’ve also been asked to review the date on my driver’s license before partaking in backyard games of any kind.  I’ve been told to leave diving to the younger folks – this seems like sound advice.

Meanwhile, we’ve heard from Eli – he’s already had one backyard cricket game back in Portland and that he’s looking to get the whole neighbourhood involved next summer – it is snowing there now, making cricket outside a bit challenging.  Eli is keen however.  Stateside residents look for the new USA Cricket League busting out of Northeast Portland sometime next summer.

As for the trip, other than me taking a few weeks doing nothing overly strenuous, we are deep into planning for the start in Alaska.  It looks like we’ll have a couple friends joining us for the first two weeks (more on that later).  We’ll hope to kick off proceedings on, or around, the 20th of May 2017 in Fairbanks.

But back to the question of how a famous cricket catch relates to our upcoming bike tour.  The answer is thankfully, not so much.  It could have been worse but one near miss on the collar bone is as close as we’ll get.  More importantly, as of now, my definition of playing cricket will consist of me watching much younger fellas run around diving for catches while I stand about shouting things like “catch it…” or “come on, you gotta be haaad…” or “noice Garrry, noice” (bit of an inside joke for Eli and those Australian cricket fans reading the blog). 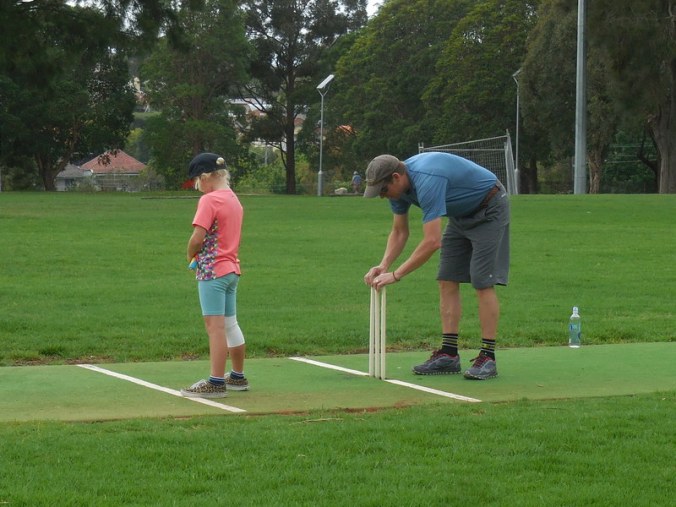