Our neighbours in camp performed about as to be expected overnight.  Somewhere around 11PM, they finally turned their radio off.  Both of us slept fitfully until then.  I woke up at 10:30 and started to go over to tell them to turn it off but paused, fell back asleep, only to wake up next at 5:15 – so really, other than being inconsiderate, the radio was not that loud.  Nancy was awake for most of it – that’s how I know when it became quiet.  I’m trying not to sound overly curmudgeonly here, but the sound of the ocean and bird song were wonderful in the morning.  I have to ask again, if you’re not going to pay any attention to what’s happening in the woods, why bother camping in the woods at all?  Why not just set the tent up in your own back yard?

We wanted to make the 9AM ferry at Tea Gardens (@ 25k) so we were up early, having a quick peanut butter and jelly sandwich on the way out of camp.  As we left, we were surprised to run into Suze and Sam, the same couple who gave us the wine and shared their campfire up on Barrington Tops a few days back.  They were also up early, making a run from the “bogans” – their term, not ours.  Back to the radio kids one last time – as Nancy and I sat eating dinner last night, they actually came over and offered us water.  We had our drinkable but brownish water from Bombah Point sitting in front of our tent.  They saw this, had several large containers of city water and were nice enough to come over – just goes to show you – we shouldn’t be overly judgemental!  (If it weren’t for the bloody radio!).

Anyway, we had a fast ride out to Tea Gardens, making the ferry in plenty of time.  Nancy mentioned that we might be riding a little too fast for a bike tour at one point but she hung onto my wheel the whole way there.  The road is lined by heaps more red gums – had we ridden slower, you’d get even more red gum photo overload. 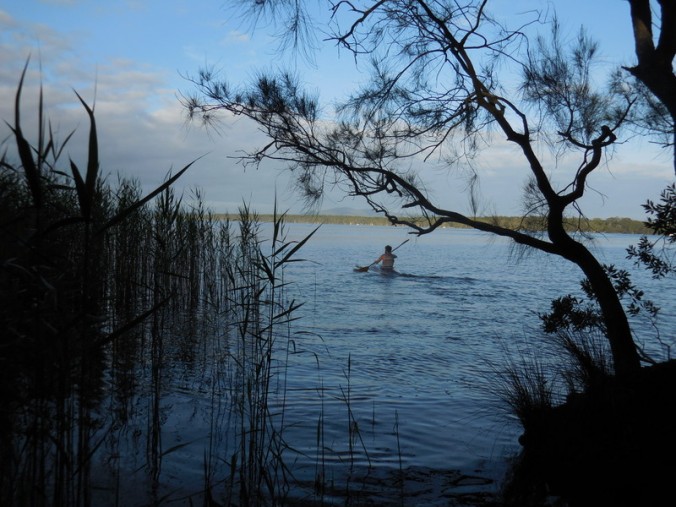 The ferry was pretty full but we got our bikes on without issue.  We had to remove all the bags and they strapped the bikes on the top but everyone was pretty relaxed about us taking up so much room.  The ride to Nelson Bay took a little over an hour – it was smooth and uneventful – just how Nancy likes her ferries.  We didn’t see any of the famous Nelson Bay dolphins, but saw heaps of pelicans. 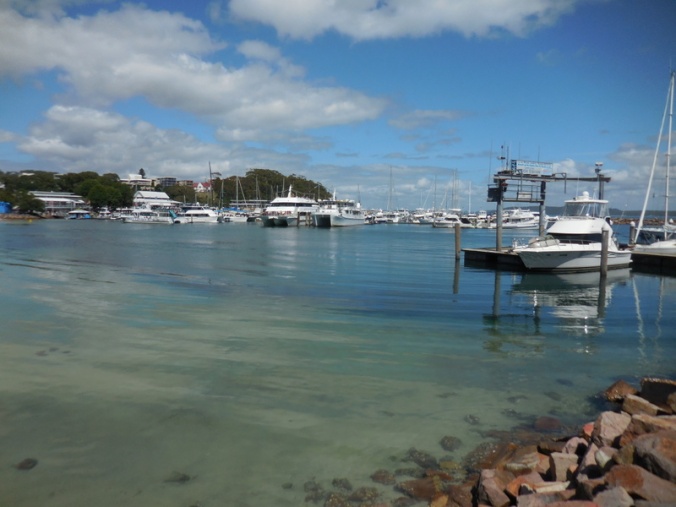 We were still not sure if we were going to ride all the way home or stop in Anna Bay, so what else to do in Nelson Bay but stop for a proper coffee and second brekkie.  Refreshed, we left there about 11:30 agreeing to call in on Birubi Campground in Anna Bay and see if they would fit us in, even though they had not responded to the note we sent them.  A short 14k later we arrived, but our hopes were dashed.  They had several “NO” signs and even though they were very nice, they had just no way to fit us in.  We sort of gave up on finding a place on such a busy holiday and headed out with full intentions of making our way towards Newcastle. 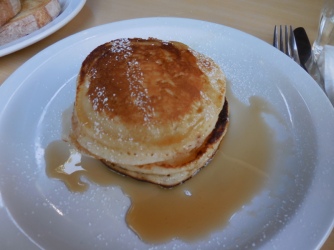 About 2k down the road, we passed The Emerald Tiki park.  There happened to be a what looked like a caretaker out front.  By now, we’d pretty much reduced ourselves to rolling past camps yelling out “got room?”, without even stopping, as the owners shouted “No”.  Well, The Emerald Tiki turned out to be a completely different story.  The caretaker turned out to be the owner, a new owner at that.  For the past 15 years, the old owners only let “residents” stay over the holiday period – because they hated being overrun by crowds.  The new owners are keen to make more of the park but lacking a longer history of folks stopping meant that they had room for us.  They also have nice grassy pitches, supper clean and new bathroom blocks and the deal clincher a “special party” for NYE. 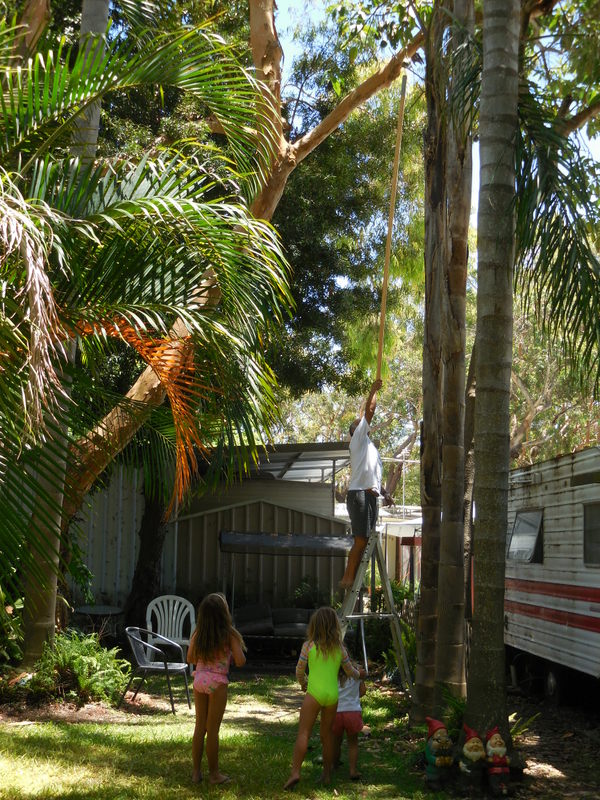 It turns out that there is a large group of Portuguese families that have a big cook-up every NYE.  The story is that for a few bucks per person, you can join in.  Apparently they have a special recipe for cooking the meat, with bay leaves from the camp grounds being key ingredient.  We were really over riding the busy Nelson Bay NYE traffic – knowing that not everyone would be sober – and knowing that tomorrow morning there will be zero traffic.  So we called it a day.  Later, I rode the 2k back to the Anna Bay bottle shop for some evening refreshment and snacks – we are now sitting in the shade watching the comings and goings of camp.  Everyone is very friendly and seems to be gearing up for a big night.  Nancy is reading, sliding further down in her chair by the minute.  I’m not placing any bets but if she makes it to 10PM, I’ll be surprised.  Probably depends a little on the Portuguese and how hard they go.  I talked to an old guy by the BBQ area earlier.  His English was not great and I think he’d seen his share of NYEs.  All the same, he was clearly looking forward to the evenings proceedings.  Film and reports tomorrow.