Okay, short post for today as it is now 8:45 and we should be in bed fast asleep by now.

We actually both slept pretty good at the campground last night, despite the cold.  The tent and our sleeping bag (Nemo) worked well and it was warm and toasty.  Dave wore his beanie all night but I got too hot – I guess that thing about losing much of your heat through your head is true, especially for people who don’t have any hair! 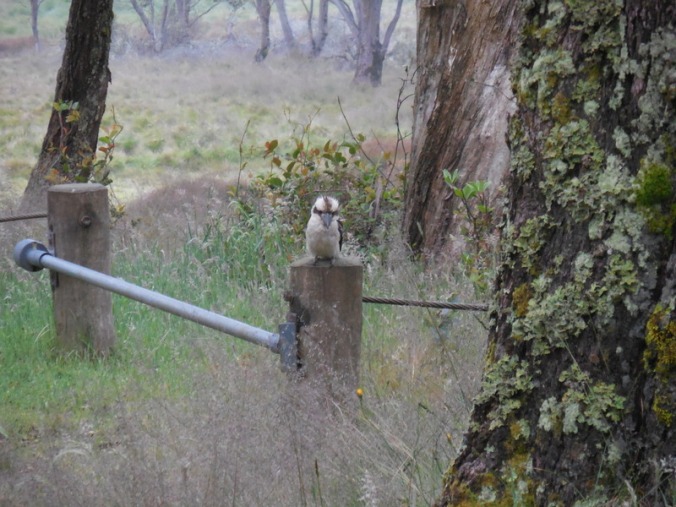 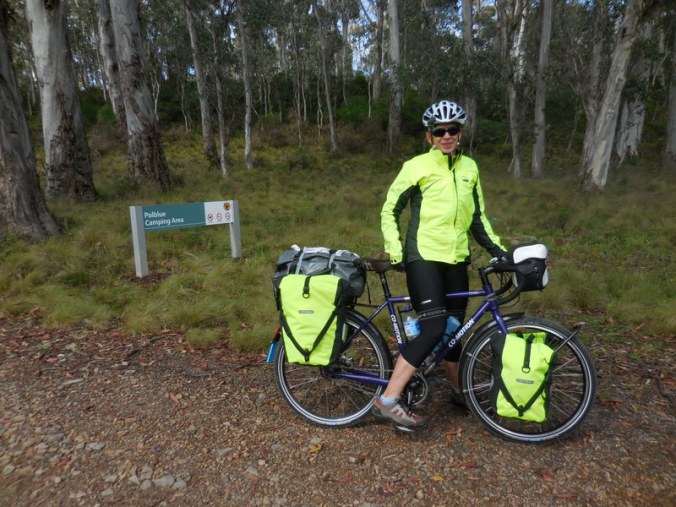 Nancy and our camp

It was still cool this morning but the sun was trying to make its way through the clouds.  The wind was biting though, so we dragged our breakfast stuff over to the little community hut and made hot oatmeal and coffee for breakfast.  By the time we got everything packed up it was 9:30 when we left camp – late for us but we needed the rest.  We said goodbye to Suzy and Sam as they set off on a little bushwalk.

From the campground it was another 35k of dirt road today – ugh.  It was a rough road too, so we had to keep the speed down.  It is very tiring riding on that rocky road, but fortunately today it was mostly downhill so at least there was no pushing.  We did have two casualties from the road – yesterday I lost a screw on one of my front bags so Dave had to do some emergency repairs last night, and then today my large water bottle cage fell off!  Actually, it has an extender doohickie to make it fit in the frame and that just sheared off, the cage is actually fine.  So, we strapped it on the back of my bike, which seemed to work fine.

It gets cold up here

The last 20k of the downhill was extremely steep, so we had to make a few stops to let our hands rest.  One of the park workers stopped on the way up and said to me that it was good we had disc brakes as there was some steep downhill coming.  When I told him we had come up the other side yesterday, he shook his head and said ‘Well, that’s just silly.’  Those were my thoughts exactly, yesterday – well, perhaps mine weren’t even as charitable as that.

We had 5k more of dirt road once we got down off the hill – by then we were just glad to be off the hill.  Then we hit the big hill for the day – over Copeland Tops.  Dave had said there was a hill to get over, but I didn’t expect anything like this!  It was really steep, with no let-up.  There weren’t even any switchbacks – just meandering up and up and up this hill – mostly between 10-15% grades.  It was about 7-8k, which doesn’t sound like much but it was really hard after yesterday.

A really hard climb to here

We hit Gloucester about 4pm, which wasn’t too bad given that we only had 25k at noon.  We are camped at the Gloucester Holiday Park, which seems to have seen better days.  We were thinking about taking a day off here but it’s a bit rough so I think we’ll move on.  We are supposed to have a shorter day tomorrow – 50k or so, but who knows what the state of the roads/hills will be.  We are headed to Stroud, a little berg somewhere south of here where Dave has found out we can camp at the local showgrounds.

You have been warned