Before today’s blog, I’m going to post some photos I took last night after Nancy finished up her post.  The light around the valley and in particular the Bylong Church was too good not to share.  Nancy did dishes while I snapped the shots below – so while I really do enjoy the results, they did not come without a cost.  I’m sure I’ll pay for my artistic attempts for some time to come.  Please enjoy – so that my suffering is not in vain. 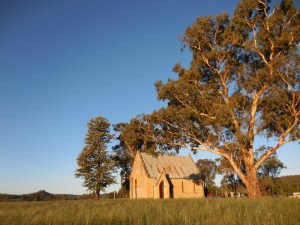 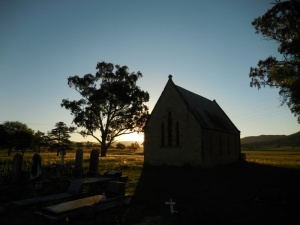 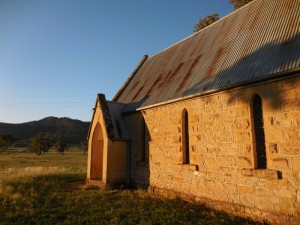 We were up early again today.  Or at least I was.  Nancy doesn’t like to get up quite as much as I do.  I have to comment about the birds on this trip.  There is no way one could sleep in anyway, if you’re in a tent.  I think I’ve worked it out that the kookaburra start first – right about 5AM.  About 5:15, the galahs join in.  And finally, about 5:30 the corella and cockatoo are in full voice.  And we are not talking about small, dainty flocks of delightful native birds.  These are big birds, who’s flocks have grown larger as Australia has converted forest to grass and grain.  There seems to be thousands of the galah and corella in particular.  And in the morning, they are squawking.  It is hard to complain about that being our alarm clock mind you –  and to have these birds, we have to be in the country on a bike trip – better than any day heading to the office for sure.

So, about today, we started with fried egg sandwiches again.  Nancy informs me that they are called “toad in the hole”.  I’m not sure where this name comes from but they are tasty and today I captured a few snaps.  I’m sure they can turn out even better with my own pots and pans. 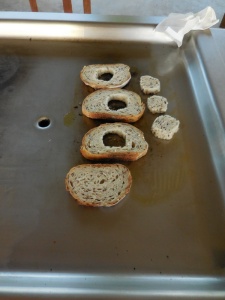 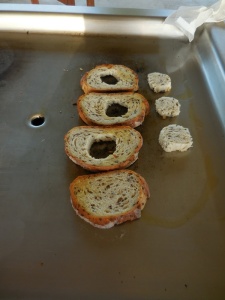 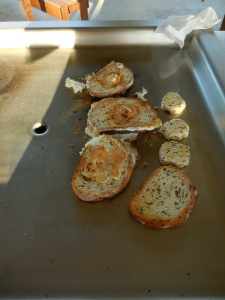 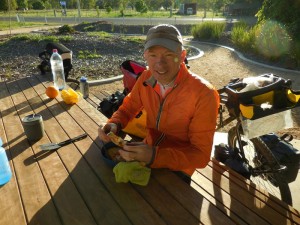 Toad in the hole – happy customer

Today we road along the Bylong Valley Way for most of the route.  We had to go over three climbs, or “gaps” as they call them here.  None of them were too hard except the third one but more on that later.  The Bylong Valley Way is bordered on the north by the Goulburn River National Park and the south by the Wollemi National Park.  The latter being famous for where they discovered the Wollemi Pine (http://www.wollemipine.com/index.php).  We didn’t spot any but did see some kangaroos and lots of pretty scenery.  The first climb to Murrumbo Gap was pretty easy.  There was no traffic except a few of the local kangaroos.  We next rode through the massive Murrumbo Valley.  This is real grazing country.  There may have only been a dozen homes in the valley but they were all surrounded by outbuildings galore – ranching on an big scale. 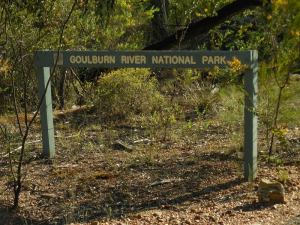 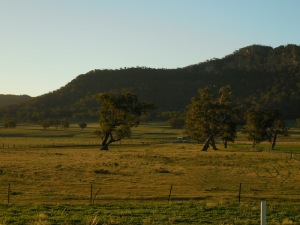 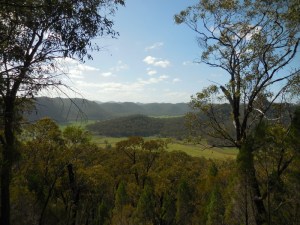 We climbed out of the valley to Cox Gap.  This one was steeper but still not too bad.  The Wollemi views from the top and down in the next valley were great.  We were ready for morning tea but did not know how far it was to the next rest stop, we knew one was coming.  Eventually we bailed near an olive orchard along the side of the road.  The rest stopped appeared only a 2k down the road one we restarted.  We stopped anyway so Nancy could use the cedar dunny – it was nowhere near as nice as yesterday’s (reportedly). 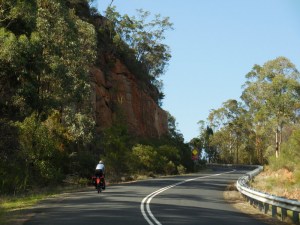 We thought we’d find a town a Baerami – where we planned on lunch and cool drink.  There was a rural fire station and no more.  So, on we rode.  We had enough water and food but were looking forward to something cool.  We eventually came to the turnoff for Kings Gap.  This was a short-cut to Denman so I was keen.  The sign on the main road stating “steep and slippery gravel road” made Nancy a little less keen.  I knew there would be some dirt and expected the steepest sections to be dirt – I was right, but smart enough not to say any of this out loud.  The steep section turned out exactly as I thought it would.  Our computers registered 16% which is steep on a sealed road.  Throw in single lane gravel and it’s not too fun.  Nancy rode up about half way when a car overtook us and spooked her.  I kept going and made it all the way riding.  Not that Nancy was any slower pushing than I was riding.  She got to the top while my heart rate was still pretty elevated.  The backside of the gap was just as steep but didn’t last very long either.  Before long we were pushing on the last 10k into Denman. 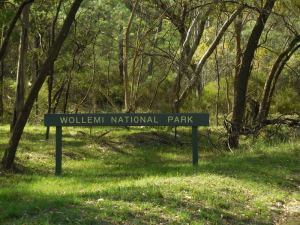 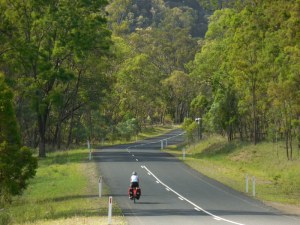 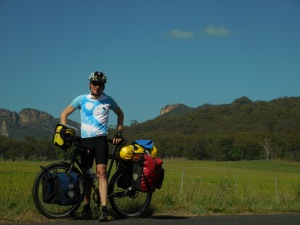 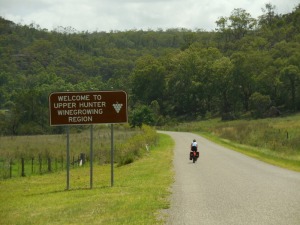 Our third wine region of the trip

We stopped in town for some lunch and made our way out to the only caravan park in town.  We are ensconced in the Denman Van Village.  And what a nice park it is.  The town looks a little rough but the park is quite nice.  They have a nice grassy area for tenters and it is not stuck off in the back 40.  In fact, the tent sites are right next to the BBQ gazebos so we’ve pretty much taken one over.  Not that anyone will mind as the park seems to be pretty empty.  This park has private dunnies for each site and even a private one for us – we think.  As we are the only tenters, we are not sure if we would normally share.  Before you get too excited, I’ve included a few snaps of said dunny below – it’s not 1st cabin by any stretch.  In addition to private dunnies, they have a fairy garden as well – like I said, nice camp. 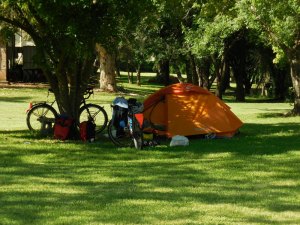 Tent site in the grass 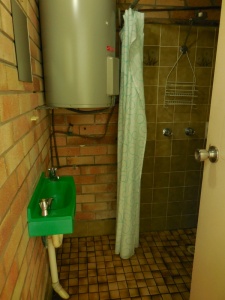 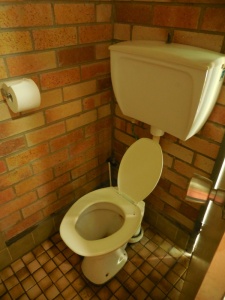 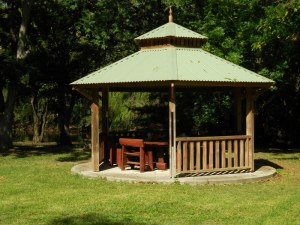 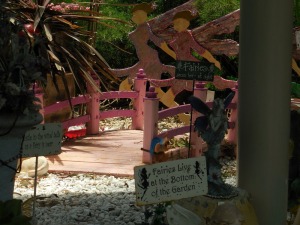 Tomorrow we head to Wollombi Tavern for our last night.  It’s 100k from here and a long day for us.  They are supposed to allow camping but we are not sure and having only lunched there, not sure about the standards.  We’ll stop there for sure, at least to get water – heading down the road to bush camp if we are turned away.

Like last night, the park here is crammed with birds.  They have been racing back and forth making the usual racket all afternoon.  Nancy snapped a few photos to enjoy below.  Now it’s time to start on the ragu sauce for the pasta dinner, made fresh with beef rissoles from the butcher in town. 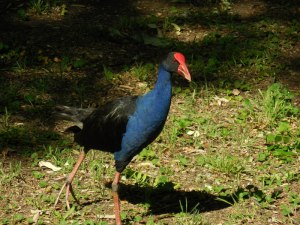 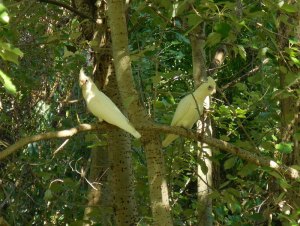 6 thoughts on “Along the Bylong Valley Way – Bylong to Denman”