Surprise, we are still in Camooweal – heavy overnight rains plus hard rain and wind when the alarm went off this morning forced us to pull the plug on riding today. The forecast was for less than 1mm of rain. By the time the alarm went off, according to the internet, we had received 33mm – that’s 1.3 inches to our friends in America.

Making matters worse, poor tent placement the day before caused us to have a virtual river running under the tent in the morning. We had set the tent up near the camp kitchen to insure good tarp position and to help block the wind. What I failed to notice was that the kitchen roof sloped towards the foot of the tent. We used both the tent and tarp up to protect us from the rain above but the drain running under our tent meant we had massive condensation in the morning. Overall, we were pretty dry, though Nancy’s sleeping bag was a little wet. When I pulled back our sleeping bags and pads, the bottom of the tent jiggled like the top of a waterbed. No wonder it felt we were sleeping a swamp. One more thing to pay attention to when we look for a good tent site. No water leaked in the tent though so it did hold up pretty good, given the circumstances.

Our tent/tarp/inner tent took hours hanging in the camp kitchen to dry out. By 10:30 it had stopped raining but by then we agree to be prudent and grab a room for the night and stay here, particularly as we are trying for a very long day from here to a bush camp. We moved all of our stuff over the room and spread out things as much as possible to get things dry – note the inner tent hanging in the bathroom in the picture below.

Of course, rain has now abated but given how wet everything was, I’m sure we made the right call. As Nancy sometimes has to remind me, it’s not an expedition! The campground is filling up early today with caravans – I guess not even caravans like to be travelling in this weather. Take a look at the pictures of a dirt road after the rain and a car with tent camper that drove along one of them! 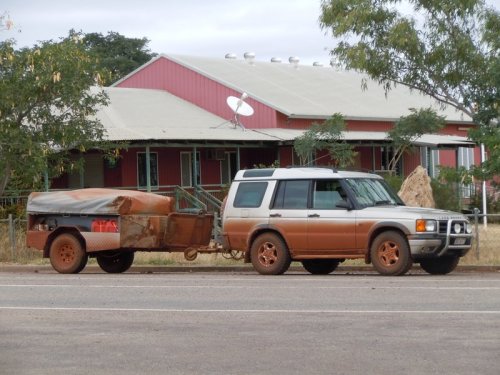 Results of driving on wet road

Once we got everything moved to the room, and mostly dried/drying, we decided to head out into town for some lunch. “Town” is a stretch as there is one hotel/pub and the BP station and general store/post office. The BP station has pretty good food but we ate there last night and decided to try the pub. On the way there we ran into Steve coming into town after bushcamping last night at the rest stop we almost stopped at. He had some good rain last night as well and was looking forward to getting a warm shower. He is staying at the caravan park behind the pub – it looks nice and seems to have a bit better camp kitchen.

Nancy and Steve, just riding in from bush camp

We had steak sandwiches at the pub – not bad. After eating we walked around a bit and took some pictures, and walked over the large bridge on the west side of town to look at the river and billabong near town. Caravanners can camp down there for free but there is no water so not a good solution for us. It was quite picturesque though and there is quite a bit of water in the river.

Weather forecast calls for tomorrow to be cloudy but little chance of rain. It is supposed to be cold in the morning – down to 2C but we can manage that if it is not wet. The temperatures are supposed to be lower than usual the next few days, which is good for us as it reduces water consumption a bit. So hopefully we will be back on the road tomorrow with the aim to getting at least halfway from here to the Barkley Station Roadhouse, 265k from here.

This entry was posted in Australia Bicycle. Bookmark the permalink.