Another rest day in Mt Isa – the sun is shining and the skies are blue. I think it is supposed to be 28C today – pretty warm when sitting in the sun. Today our chores are to clean the bikes up, figure out the packing so that we can strap on as much water as possible (onto Dave’s bike 😉 notwithstanding the helpful comments from my brother), get a few more supplies in town and mail a package of stuff we have decided we can do without.

Why do we eat them? Well, most importantly they usually taste good as it is hard to really screw them up. They provide the necessary nutritional components for us – carbohydrates from the roll, protein from the eggs and bacon, plus a nice little bit of fat from the bacon which we often don’t really get from the other food we can get access to on the road. And they are filling for not too much $$. There are probably other dishes that provide these same nutritional components but we are unlikely to find them very often out here on the road and the cooking quality varies considerably so it is a bit risky.

Queensland seems to use the egg and bacon roll name, however they have added another wrinkle to the story as they often have something referred to as an egg and bacon burger. The first time we ordered on we were not sure if we were going to get a hamburger with egg and bacon on it. Logical, don’t you think? If you order a cheeseburger you don’t just get cheese on a roll, you get cheese on a hamburger on a roll. Well, not so logical up here. In Queensland an egg and bacon burger is really an egg and bacon roll with salad and usually cheese on it. By salad I mean lettuce of various sorts, sometimes a tomato slice and usually a slice of beet root (or just beet, to those in the States). I like a bit of lettuce and tomato on it – at least I can pretend I am getting some veggies – but I don’t really care for the beet root and I don’t like cheese on it.

We generally only make our own egg and bacon rolls on days when we are at a caravan park and have access to a camp kitchen – it’s too hard to do otherwise. Dave is usually the chef, as preparing them usually involves the BBQ and lots of splattering. I try to take care of the roll preparation and getting the coffee made so that it is ready to drink when we sit down to eat. A nice cup of espresso always adds to the pleasure of eating an egg and bacon roll. During rest days we get real milk in our coffee, which is lovely after having powered milk in it while we are on the road. It’s the little things in life that make a difference. Who needs a house, a car, or even a bed when you can get real milk for your coffee… 😉

So, here is how we make our own egg and bacon rolls (we don’t do burgers, though we probably should put tomatoes and lettuce on to get more veggies). The first thing is to make sure you get the right bacon. In Australia they sell bacon referred to as ‘short cut bacon’. It is generally the bigger piece of bacon with out the stringy fat bits that you get on normal bacon. It is often thicker than normal bacon as well, so you really get the meat of the bacon and the flavour.  You often have to go to the butcher to get this type of bacon though they sometimes have it at the big grocery stores.  For those in the States this is most similar to what we used to call Canadian bacon. See the pictures below for the difference between regular bacon (at the top of the picture) and short cut bacon (at the bottom of the picture). 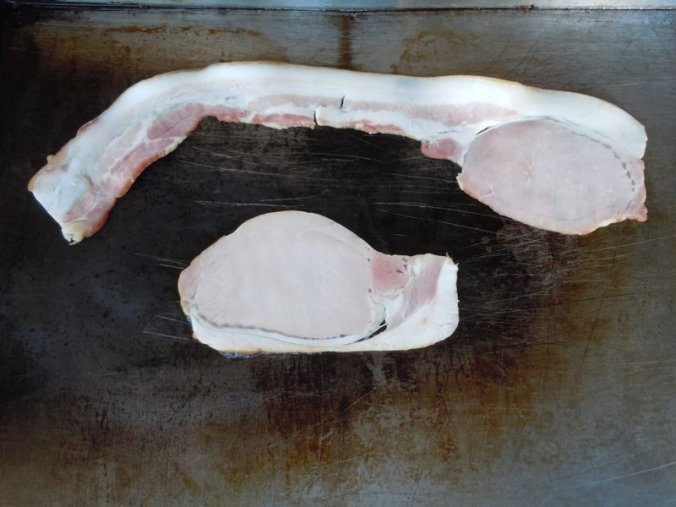 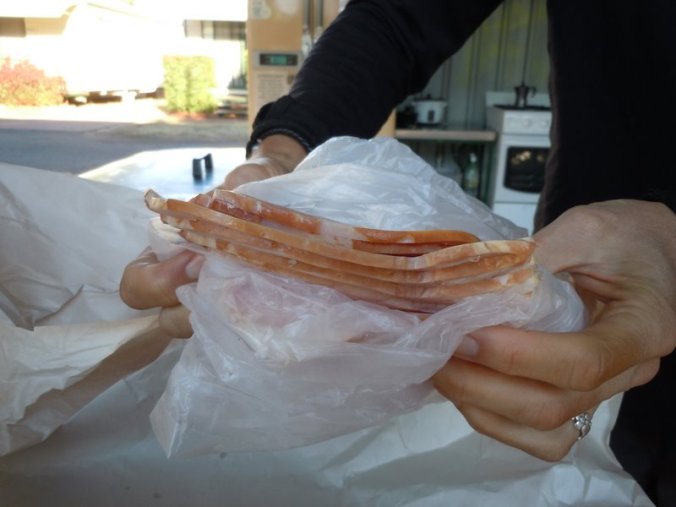 The type of roll you use is really based on your own preference. The rolls in the picture below are a bit big but that’s good as the hold a lot! You can use hamburger buns or even thick sliced bread. We try to get multi-grain rolls usually, but I sent Dave into the bakery to get these and sometimes he forgets to try to lean toward the healthier end of the bread scale… I like a bit denser type of roll than the ones in the picture if you can get them. 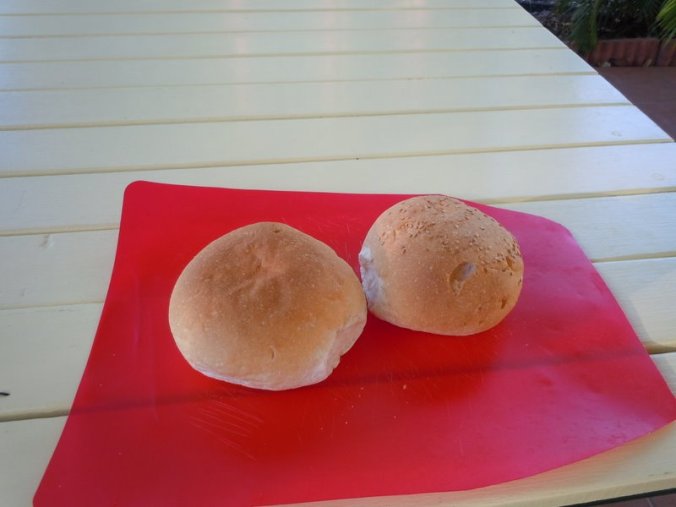 When you order an egg and bacon roll at a cafe you usually have the option of barbecue sauce or tomato sauce (ketchup). I would say always go for the BBQ sauce, as it really adds to the flavour, but again that is a personal preference. We don’t use any special kind of BBQ sauce as we can’t use it all and it doesn’t carry well – we just buy the cheap kind and it does the trick. You can also get very fancy schmancy with some nice tomato chutney or relish, which I am sure would be delicious, but again we can’t use it all up and then it would go to waste as it usually has to be refrigerated. 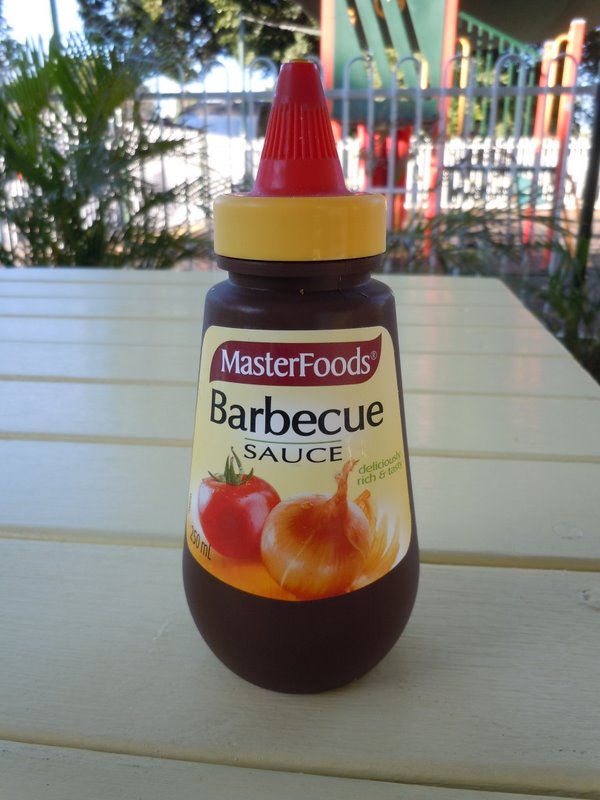 So, while I am running back and forth getting the rolls cut and the coffee prepared (we get two pots of our little espresso on rest days, one for each cup) Dave cooks up the bacon first, getting the grill the right temperature with a bit of bacon fat so that the eggs can cook without sticking. If there is no grill (bad camp kitchen) we use our little frying pan – this requires a lot more coordination but is possible.

The cooking of the eggs is critical and the chef must pay particular attention to getting the consistency right. We like our eggs to be a bit runny in the middle so that they break and soak into the bun a bit. Actually, usually what happens is the first bite makes the eggs break and it runs out the bun and down your hands so it is important to have something underneath your roll and a good napkin when you start eating! If we are going to be off the bike for a couple of days we buy a dozen eggs – free range if we can get it, so I don’t feel so guilty about a bunch of chickens cooped up in a shed never seeing the sunlight…. If we do this we get two eggs on each roll. If we were at home (if we had a home!) I would usually just have one egg but what the heck, eat while we can!

The rolls taste better if they are toasted a bit, and hopefully they are too big to fit in the toaster so Dave toasts them on the grill off to the side a bit, watching closely to make sure they are not burned (though they usually end up a little bit ‘brown’ on the sides but still tasty).

Anyway, the cooking usually comes together all at the same time, and assuming I have done my job getting the other bits ready the production stage commences where all the bits go on the rolls. First the top and bottom of the roll is buttered (while warm so the butter melts), then BBQ goes on top and bottom. Then Dave gently puts the eggs on and then puts the bacon on top and then the top half of the roll goes on and, wa la, you have a delicious egg and bacon roll that should fuel your activities for a few hours! 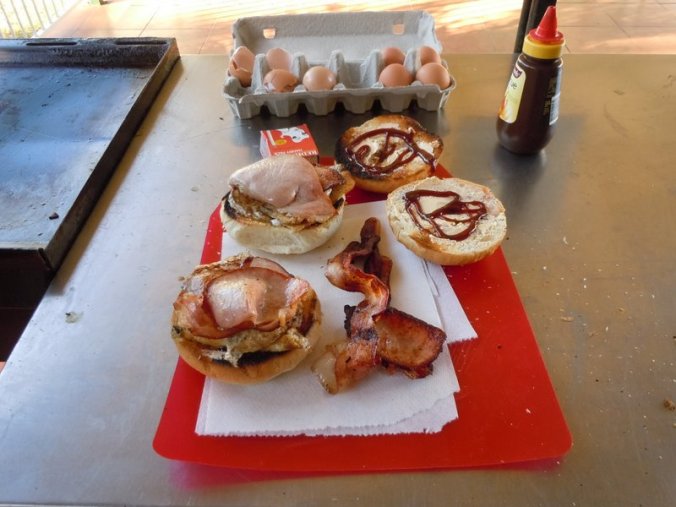 There are of course all kinds of variations – note this is a guide only and not a definitive recipe (just a guideline, not a rule, as Dave has the tendency to say when he insists on doing something directly contrary to a posted sign…)! Be creative when you are preparing your own egg and bacon roll (or bacon and egg roll, for those of you in Victoria). It will be interesting to see what other twists the other states and territories might add to the egg and bacon roll story. We will keep you posted! 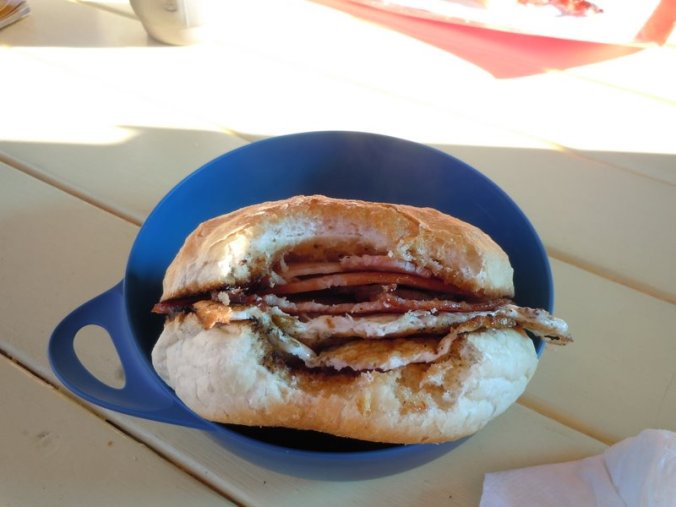 Close up of finished product 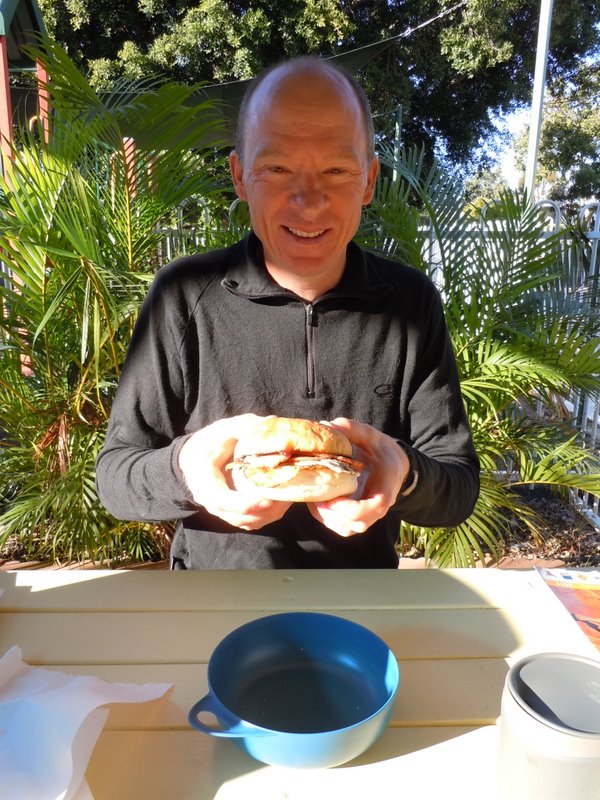